THE SCURRILOUS ART OF THE FAKE TWITTER FEED. This Mike Leach Twitter feed is almost certainly fake to a degree we will arbitrarily quantify as 99.999% certainly bogus. Leach is a bit of a technophobe, doesn't want to comment publicly on anything re: the lawsuit with Texas Tech, and probably doesn't put iguanas in overhead compartments on airplanes. 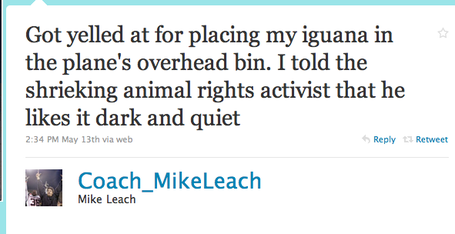 Then again: maybe he does, because this is Mike Leach. Someone pull us from this Borges-esque labyrinth of simulation, loops, and facades called the internet! (Please don't.)

PAC-10 BARNSTORMING FROM ONE COAST WHERE THEY BARELY CARE ABOUT COLLEGE FOOTBALL TO ANOTHER. The Pac-10 will PR the hell out of this offseason by yes, putting Rick Neuheisel and Lane Kiffin into a plane together along with the rest of the coaches and pointing them at New York and Bristol on a PR tour. It's a proactive move, but thanks to CAA repping we'll have to wait for the full array of contrived agent publicity ploys: the Stanford Tree's inevitable sex tape, Lane Kiffin's heavily photoshopped shirtless fitness spread in Men's Health, and Dennis Erickson's rumored affair with Amanda Seyfried. (Not true, but don't underestimate the power of a twelve pack, a convertible '86 Mustang, and "Stay the Night" by Chicago blasting on the speakers on a clear desert night, man.)

YES THIS IS A SECOND PAC-10 STORY IN A ROW BECAUSE WE CARE: Peter Lalich, Oregon State qb, has been kicked off the team following his second alcohol-related arrest as a Beaver. We offer support to Lalich as a former heavy problem drinker in our early twenties who cleared up his problem before it got too bad, something we accomplished at [checks clock] 11:38 a.m EDT today. Ten sober minutes, Peter, have taught us all we need to know about life. Hey, bottle of sherry! You want us to drink you now? But it's not even noon, and we're working!

IT'S NOT US, IT'S YOU. We'd call total bullshit on this coming from a Georgia fan eight years ago, but their out-of-conference scheduling over that span has earned them shit-talking privileges in that department, though we have no idea how valid the charges of "Big 10 ducking the SEC" are without looking into it ourselves and talking to people who actually do the scheduling off the record, since on the record they'll simply say "Well, it didn't work out" and off the record they'll say "Pussies wouldn't play us." Florida, meanwhile, is really excited about their ongoing series with Charleston Southern.  #FOLEYSCHEDULEWITHBALLSPLEASE

IT'S NOT YOU, IT'S US AND WE LOVE IT. If good ol' boy is the stereotype to go to when discussing the SEC, is the Big Ten's "Guys in shitty suits and dog-mangled shoes drinking deplorable coffee from styrofoam cups?" Or can we just say "Jim Delany on Tuesday" and be done with it?

ACK. The SEC doesn't need to expand, but here's Clay's stab at it anyway. The dilution of product is the major concern here, as is the notion that in becoming a network-driven eyeball farm for TV doesn't change the central problem in the Big Ten: substandard coaching and hiring.  Whether more money changes that or not determines the overall direction of "product quality," and just thinking about football in those terms requires quotes and a queasy feeling in the pit of our stomachs.

MEMES! Included in this week's edition: this amazing photo of our favorite NBA player. 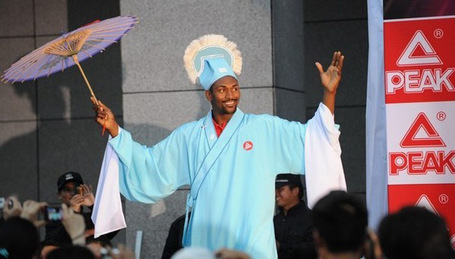