FLY ON DAWGZ: Steelemas arrived for us early--because twice a year, we clean Phil's gutters--and in it, a stunning surprise that, in retrospect, shouldn't be that shocking: the Bulldogs listed at number three on Phil's surprise teams of 2010. Fly, you filthy inbred droolers, fly! 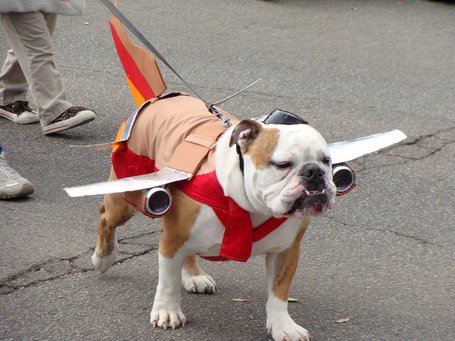 Doug and ourselves have discussed making a mock-rapper for the UGA set named "Stroke Dawg" after the UGA cartoon logo where, to be fair, it really does look like UGA has a drooping lip common to stroke victims.  He'd spit game with a slur, and tell truthful tales of the difficulty he has negotiating stairs and other difficult daily challenges of strokedom. He'd also remind you that even with half a dick, he could turn your girl out better than she ever knew before.

As I chronicled earlier, Mark Richt does well when epectations are low and my #3 Surprise Team the Georgia Bulldogs don't even figure to be in the preseason top 20 this year.

It's completely valid, especially with that O-line (the best in the conference) and Richt's usual tight-pantied playcalling benefitting Aaron Murray and his inexperience. The lack of pass rush should still terrify anyone hoping UGA's defense will be less sieve-like this year, though the news that Todd Grantham actually believes in "playing the ball" and not "spacing out defenders in random triangles" bodes well for their chances. In the end, Willie Martinez seems to have been coaching soccer tactics, and if he'd like to replace Bob Bradley he can whenever he's ready.

JARVIS WILLIAMS, CONT'D. Jarvis Williams, Gator great and Miami dolphin safety, appears to have died of an asthma attack, not a heart attack. There's a nice quote by Louis Oliver in there, too.

SO EXCITED THESE GUYS ARE REALLY WORKING AND DOING THINGS. LIKIN' IT.  The [NAME REDACTED] Mideast tour diary confirms your suspicions that he is a terse prose stylist, and not a terribly interesting one. This section amused us, though.

There was a submarine that just came in here. How about those guys?

Men, you gotta be like those men in submarines. Gotta be quiet. Gotta work together. We're underwater right now, moving silently under Purdue, who we trail by 17 at the half after four turnovers and three blown coverages in the secondary. Hey! Are you using a cell phone? SUBMARINES DON'T HAVE CELLPHONE RECEPTION!

/team wins without him

SPEAKING OF: Yeah, he's on a hot seat. (On a submarine named Illinois.)

AHH DEMOGRAPHICS: Ivan Maisel has further depressing demographic info on the midwest and its effects on college football's landscape. We can't even be triumphalist southerners about this: the notion of losing ten percent of everything in your economy is devastating shit in any terms.

A MOMENT OF COMMUNITY OUTREACH: A moment of silence for one of our own: John Glaser, a self-confessed Kansas football and basketball geek, Jayhawk fan, Marine, father of two, Phog.net poster, and Shawnee firefighter who died looking for survivors in a house fire last Saturday in Kansas.  There is a memorial fund set up for him if you would like to contribute, with all the info listed on the extremely moving memorial thread set up on Phog.net.  Condolences don't cover it, but they're offered anyway.