14 weeks after the hearings and a full six to eight weeks after the usual release window for NCAA investigations, the NCAA report on USC still lurks somewhere in the offices of the NCAA. If you're looking for it, it's the box over there that's smoking with a heat so intense it's burning a Trojans logo onto the side of the box.  Officials handle it only with the longest set of tongs they can find, not because of its caustic contents, but because the nude full-frontal pictures of Lane Kiffin raise the temperature inside to dangerous extremes.

In light of the complete lack of leakage re: the report's contents or their severity/leniency, the USC Suspension Meter remains at FINGER GUNS (PEW! PEW!), since this is the gesture the NCAA will make in announcing either no significant findings or the "vacate wins" option, which hurts those imaginary people who did all that bad stuff back in 2004. WHY DO YOU HATE THE IMAGINARY PEOPLE OF THE PAST, NCAA?

So yes: fingerguns for the moment. 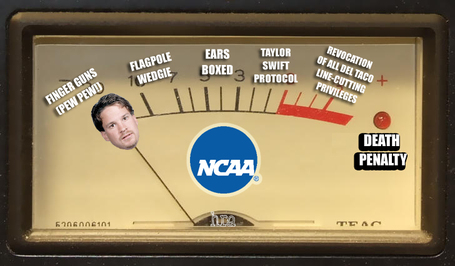 If the NCAA's perverse system of enforcement made as much sense as Lost, then vacating wins would result in Pete Carroll suffering a deep gash to his neck in the sideways universe he now inhabits in Seattle. But because Lost made way more sense than any of this, his hair will probably turn brown again on the announcement of the news. He'll also get that eight pack back he hasn't had since the age of 52, because you know, aging is hell for us all.