IF YOU DON'T THINK THIS COULD ACTUALLY HAPPEN, YOU DON'T KNOW TOMMY TUBERVILLE AT ALL

Share All sharing options for: IF YOU DON'T THINK THIS COULD ACTUALLY HAPPEN, YOU DON'T KNOW TOMMY TUBERVILLE AT ALL 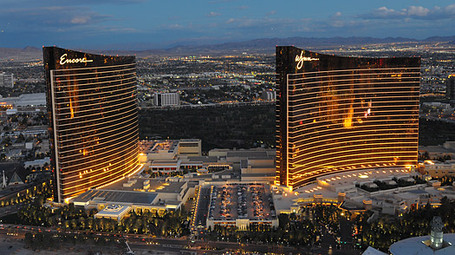 Setting: A conference room in the penthouse suite of the Wynn Encore in Las Vegas. Twelve university presidents and their aides are crammed into the room with BCS executive director Bill Hancock, who sits imperiously at the head of the table. A copy of the Las Vegas Review-Journal sports section sits on the table, with the banner headline "NCAA Drops Hammer on Trojans." Hancock clears his throat.

HANCOCK: So by a vote of ten to two, with one member abstaining, this committee votes to accept the conference commissioners' recommendation that the University of Southern California be stripped of its 2004 BCS national championship. Robert, as the president of a Pac-10 school, I'm a little surprised to see you voting with the majority there.

UNIVERSITY OF ARIZONA PRESIDENT ROBERT SHELTON: (slurring) You think anybody in the Pac-10 likes USC? Fuck the Trojans. And somebody get me another Singapore Sling.

HANCOCK: Before we get to that, I think it's only prudent that we vote on the motion made earlier that we retroactively give the title to Auburn, who went 13-0 that year. All those in favor of crowning Auburn the 2004 BCS national champions, say "aye."

Eight or nine "ayes" rise from the assembled presidents. As a stunned Hancock scribbles down their names, pan to a raven-haired executive assistant, a nameless functionary in one of the presidents' offices, sitting in the back of the room. A smile crosses her lips and she quietly excuses herself to the suite's main room.

Out in the main area, she dials a cell phone.

FUNCTIONARY: Coach Tuberville's office, please. Thank you. (beat) Coach? This is Mandy. It's done. Shall I start looking at rings for you?

The office of Texas Tech chancellor Kent Hance. Hance stands up behind his desk as the door opens and coach Tommy Tuberville, resplendent in a dark-blue Armani suit and his usual cocky grin, enters. They shake hands and take their seats.

HANCE: So, coach, to what do I owe the honor? I've been hearing good things about practices lately. Seems as though you've even found a use for Adam James.

TUBERVILLE: Well, we've mainly just been using him as a decoy in the four- and five-wide sets -- the formations that coach Brown cooked up fool the DBs every time. Or maybe they just really like tackling the hell out of him, whatever.

HANCE: All I care about is that I haven't heard from Craig James in more than two weeks. As far as I'm concerned, you're doing an A-plus job.

TUBERVILLE: Well, I'm glad to hear you say that, chancellor, because I've always been of the opinion that an A-plus job deserves an A-plus salary.

HANCE: (on guard) Well, ah . . . I hope what we're paying you here counts as an "A-plus salary." Lot of people pitched in to bring you here.

TUBERVILLE: I know, and I don't want to sound ungrateful, but . . . it's just been naggin' at me, how much less I'm making here than I was at Auburn. Barely half, as a matter of fact. Almost makes it look like y'all think I've gotten worse over the years.

HANCE: Coach, I can assure you nobody at Texas Tech feels that way.

TUBERVILLE: Well, that's good to know. 'Cause I was thinking now might be a good time to take a second look at that contract, see if we can't bump those numbers up a bit.

HANCE: Coach, that's -- that's not exactly how we do business here. I mean, renegotiating contracts is one thing, but you -- you haven't even coached a game for us yet.

TUBERVILLE: No, chancellor, you're surely right about that. But that doesn't mean I haven't achieved anything.

HANCE: Ahh, yes, yes, coach, I've been meanin' to congratulate you on that. Heck of a vindication for you and what you accomplished at Auburn.

TUBERVILLE: Mighty glad you think so, Kent -- can I call you Kent? 'Cause I reckon, if you're so happy for me, maybe that happiness oughta manifest itself in the form of, oh, another two million a year or so.

HANCE: Coach, lemme get this straight -- you want me to bump you up to three and a half million before you've even coached a single game for the Red Raiders?

TUBERVILLE: Well, seein' as how I'm a national-championship-winning coach now, Kent, 's only fair I earn a salary commensurate with my achievements. Three and a half's the goin' rate now for title winners, give or take. Heck, Meyer and Saban are both makin' upwards of four million, so if you think about it, I'm kinda goin' easy on you here.

HANCE: Well, coach, depending on the outcome of the 2010 season, I'd be happy to revisit this with you at a later date. But there's really no way I can talk that kind of money with you before you've coached a single game.

TUBERVILLE: Well, not that I don't understand where you're comin' from, Kent. But I've just never been the kind of guy to put off until later something that I could be doing now. Like, for instance, I could've waited until later to tell you what I really want is the same four million Saban and Meyer are making, but I guess I'm gonna go ahead and tell you that now. And I could wait until a good while later to file a lawsuit so that I can get the salary that I, as a national-championship-winning coach, am due, but the more I think about it, there's just no good reason for me not to take care of that now.

HANCE: Coach, I'm afraid I don't care for the tone of your --

TUBERVILLE: By that same token, I could wait a while to call Craig James and tell him you asked me to bump his son back to fourth-string on the punting unit. But I've got my cell phone with me, don't have a lot on my plate today, so I guess I could take care of that now, too.

Tuberville removes his cell phone from his jacket pocket. 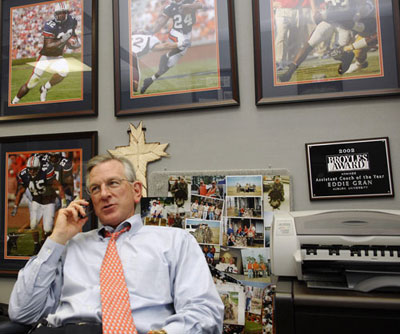 TUBERVILLE: (dialing) What's the area code for that part of Texas these days? Is it nine-seven-two or four-six-nine?

Another long pause as the two men stare each other down. Hance's lower lip begins to tremble.

HANCE: You saw what he did to Mike Leach. I -- I couldn't stop it. He was like a freight train.

Tuberville pulls a tri-folded sheet of paper from his other jacket pocket, unfolds it, and slides it across the desk to Hance.

Hance pauses, then pulls out a fountain pen and signs the document. Tuberville smiles and takes it from him.

TUBERVILLE: You'll get your copy registered mail by the end of this week. I want to thank you, Kent -- this has been a productive day.

Smiling, Tuberville leaves the office. All Hance can do is stare as he watches him go.

Cut to the front of the building in which the chancellor's office is located. Tuberville dons a pair of sunglasses as he trots down the front steps, and right as he gets to the bottom, a black Escalade pulls up. As he gets in, we can see the raven-haired functionary from earlier in the driver's seat.

The SUV speeds away.