Today, as Michigan announces their sanctions for tiny violations of the NCAA's arcane codes regulating, we celebrate the best attempts to mitigate/negotiate/otherwise deal with the 78 armed, one-eyed bipolar robo-octopus otherwise known as the NCAA. Example one: Oklahoma, 1978, Las Vegas. 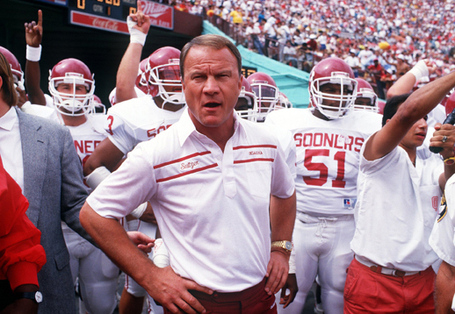 Oklahoma, October 1978: NCAA investigators respond to a report that Barry Switzer, several assistant coaches, and no fewer than seven players "took over a craps table at the Sands, refused to leave for three days, and held Joey Bishop hostage for 72 hours demanding the reunion of the Rat Pack."

Result: Investigators determine Switzer did in fact "stay hotter than a Arky whore's panties in Hell in Zimbabwe" for stretches of six, four, and two hours a piece, and did drop cash on the floor haphazardly. The dropping was considered purely out of excitement, however, and investigators could not verify the location of the money since investigators "were corrupted by copious glasses of scotch delivered consistently to the table, where they themselves rode hot streaks of insane length without crapping out."

Punishment levied: Investigators fired, only to find jobs as compliance officers with Oklahoma. Alabama State docked seven scholarships and placed on probation for five years. Switzer lauded for pure dick slangin' swagger and issued a certificate in honor of this, though history is unclear as to why the NCAA felt this was within their purview or even necessary. We mean, shit: just look at that man and tell me he needs external validation.