Share All sharing options for: SPORTS MEME RANKINGS: YOUR REMINDER THAT EVERYWHERE SUCKS

Sports Meme Rankings are up at SB Nation, and they mention an important point: your town (college town included)  sucks, and you take it too seriously. All of them. We don't care where you're from, be it Paris, New York, Brazzaville, Christchurch, Topeka, Atlanta, Pago Pago, Alberta...it sucks. All of them, in some way or another, suck because they are material places providing unnecessary obstacles like transit, red lights, long walks, parking, taxes, other people, and "rules" standing between you and happiness.  The closer we get to the conveyor belt world of Wall-E the better, especially those floating touchscreens, because they look tight, yo. 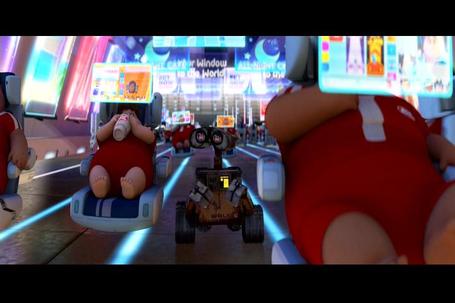 Take a few of the SEC's host of miserable environs, for example:

Starkville: Named "Starkville," and accepted personal checks at Burger King as recently as 1997. You can throw a beer can out of the city limits. When it lands, that beer can will be eaten by a malevolent goat. Do not fetch: you will be attacked by that goat and its friend Roscoe, who just got back from a manslaughter bid at Parchman Farm.

Auburn: Ruled entirely by aggressive herds of ornery squirrels. They hold seven seats on the city council and rape and kill with impunity. Turn the wrong way off the interstate and you step into a Walker Evans photo. Only movie theater in town has three screens, and all of them show Walkin' Tall five times a day. This might sound good, but it's the remake with "The Rock," and locals are told it is a factually accurate documentary.

Knoxville: Like Gatlinburg without the joy of airbrush or funnel cakes. Only highlight of a visit to the town is getting mugged by Pat Summit and then apologizing to her, because it was your fault that you had all that money in your pocket. Perpetually cloudy. Thankfully located near a major source of nuclear waste capable of irradiating the area at any moment.

Tuscaloosa: Home of the Bear Bryant Museum, a luxurious facility founded in 1820 to "glorify the reputation of one Paul Bryant, who will bring unity to this great land, dignify its boll weevil-ridden wastes with victory, and create crippling masculinity deficiencies in all who behold his as-yet-unborn visage."  As a courtesy to the community, the museum and its football team opened up a small community college in 1985 adjacent to the school.

Gainesville: Wow! We can go this chain restaurant, then that one, and then pass out in a parking lot after our car gets towed! WHAT A TOWN! If you don't like the way something looks, just wait: it will be bulldozed in three days per city zoning laws. Has only eight homeless guys, but each is scarier than any other homeless person you've ever met in your life. A friend of ours was once sighted up by a dude with a laser sight and a gun in a car on Depot Avenue. He rolled down the window, smiled, and said "AW MAN I'M JUST FUCKING WITH YOU." Fantastic place.

Those are just a few examples, but seriously, civic pride is annoying as hell, especially when your awesome neighbors will be the first to siphon the gas out of your tank in event of the coming Road Warrior wasteland. When you're strapped to the front of the lead marauder's nitro truck, sad boy, you'll see how far your Kiwanis club cred goes.* The place you're from sucks, and is not to be used in arguments about which place is better, because they're mostly the same. Never forget this, because it's true everywhere.**

*The circus peanuts makes it festive.

**Unless you're from Thailand. Thailand's cool OH DAMMIT--