Share All sharing options for: PRECIOUS AIN'T PULLIN THE TICKETS

Derek Dooley deserves some seriously lenient grading for his performance as Tennessee's coach this year, not because we don't want to see the Tennessee football program burnt to the ground and converted into a parking lot for the Vols ladies' crew boathouse, but because occasionally logic comes over to stay for a few days and tidies the place up against our wishes. Dammit, that corpse of Ron Prince belongs there. HE'S A COMIC TOUCHSTONE AND THUS NEVER ROTS AND YOU WILL PUT HIM DOWN-- 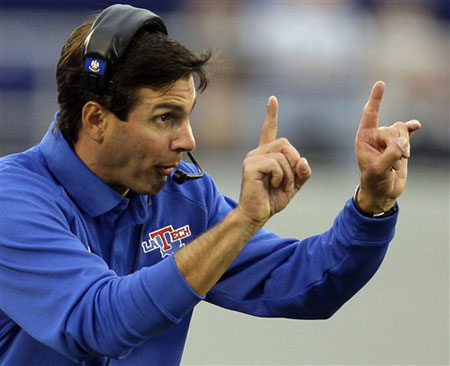 Precious/Doolander comes into a situation akin to a sleepwalker coming to at the wheel of a stolen car rolling 85 miles an hour the wrong way down a busy interstate, and to his credit he's slowed down the whole mess without much fuss. Aside from Bryce Brown transferring or not transferring, Dooley has salvaged a recruiting class, brought in a cycle of spring practice without fuss, and has pissed off the media by charging them for practice attendance. All in all, a successful season for a Sabanite coach in year one.

One nagging aftereffect of all the Kiffin business and lagging on-field performance: ticket sales. One major impetus for the Kiffining in the first place was lagging ticket sales, something Dooley can't be expected to pick up in year one. (Given the low-wattage, fourth option hire, it seems extremely unfair to saddle him with this.) But when your biggest home game in 2010 is going in a three pack for $150 while LSU/Florida tickets alone are going for $224 at base on Stubhub...yeah, it's anemia, doctor, and the red meat of victory is the only thing that's going to help that ailment.

(And yes, the UT site is going to be face, but the biggest rivalry game of the year at home is usually the opportunity taken by admin to jack up the price on a package ticket deal for one or two cupcake warm-ups.)