Please say that if Texas starts its own sports network, the following elements will all be included:

LIFTIN' STUFF WITH JEFF MADDEN. Just this picture on the screen for thirty minutes while Ministry's "N.W.O" plays: 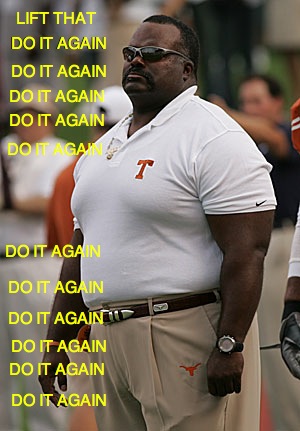 You'll lift something out of fear. Pure, spine-tingling fear. After you've power cleaned your coffee table for thirty straight minutes, you'll be shocked at the muscle definition and explosive fast-twitch power you'll have acquired.

MACK BROWN SELLS SHIT. Of all the coaches currently working in NCAA D-1 football, no one would simply dominate a home shopping show like Mack Brown. Selling Texas-related gear would be simple. Instead, have Mack Brown sell items pulled from his garage at random. Better still: have him sell items pulled from Ricky Williams' garage at random. You didn't know you needed five books on ayurveda bundled with an old Dreamcast, but when he flashed that smile and said he'd throw in one disc of Shenmue for free, you grabbed for the phone without even asking why...

THE RICKY WILLIAMS MOVIE SHOW OR NOT WHATEVER. This show really could happen, and it would be spectacular. Ricky, a couch, and MST3K grade movies. And while we don't want to insinuate anything, there might be some medicinal improvements that accompany the show okay you'll be high as fuck when watching it.

BEVO ON THE TOWN. Just take Bevo out on a leash in public places and see what he eats. Again: you'd watch it for way longer than you think.

POM SQUAD HOUSE: The highest rated show, and for all the wrong reasons.

COLT 'N JORDAN: Were you actually to broadcast this show about the two roommates splitting an apartment located in Columbus so they could continue to be roommates despite playing in Cincy and Cleveland--a scenario we just made up--it would garner high ratings until people tired of watching them play catch with a Nerf football in their apartment, an activity we estimate makes up 85% of their leisure schedule. The other 15% would be fruitless, sad fishing in the Olentangy.

We started this as parody, but now that we've started, this...this has legs, dammit.