PATRON SAINT: Wojtek.  When does a bear get to be patron saint of Spicy Living? When he kills a mess of Nazis, that's when. 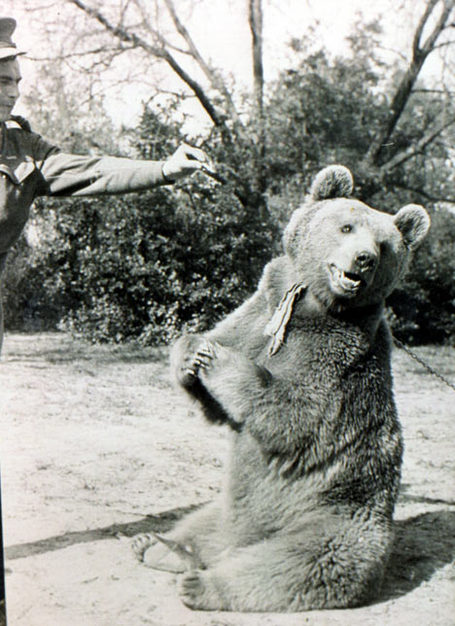 Sometimes, across the vast plain of history, you see a single arm waving hello. Sometimes, if you squint hard enough you can recognize its face, see the contours of its eyes, its smiling mouth, and recognize a familiar spirit, a great soul, someone embodying the values you cling to no matter how harshly the winds of life bluster: love, friendship, courage, humor, and an abiding love of gluttony and outdoor defecation. Sometimes, if you're lucky, you see these.

Sometimes that figure is a beer-drinking, cigarette-loving, fearless bear who carries artillery shells.

This week's patron saint is Woytek, the Soldier Bear, an Iranian Bear adopted by Polish artillery in World War Two who decided that the perfect way to scare the scales off of anyone crossing their path was to make sure they had a live bear hanging out of their truck window on the way into battle. Brought up as we were on condensed milk from a vodka bottle, Woytek lived and slept with the men, acquiring a love of beer (his favorite beverage) and cigarettes (he ate them) as the unit fought with the Allies across Europe. He once caught an Arab spy sneaking into camp. We have no data to back this up, but suspect the force with which the man shat himself ripped the very fibers of his pants to shreds because WTF A BEAR.

Woytek went on to carry artillery shells at the Battle of Monte Cassino in Italy, one of the many skills his masters taught him. (He supposedly knew how to turn on the camp shower.) Snipers never shot him, presumably because the only thing more frightening than a war-bear are the men he calls master. In between firefights, he wrestled with the men, drank beer, ate cigarettes, and covered his face with his paws when soldiers chastised him for getting into their food lockers.

Woytek eventually died at the age of 22 in a Scottish zoo, where veterans paid their respects by throwing cigarettes at him to eat. We want to clone him and take him for long walks around the park, after which we will sit at the bar and drink until we're full. Then, we shall ride him home as he zigzags down the sidewalk.

HT: Reader DawgShark, who knows what's what when it comes to choosing internet handles.

Aux armes, citoyens, after this:

Orson:  Bai Jiu. As with many recommendations in the DV, this lies somewhere between dare and suggestion. A daregestion, if you will, because baijiu is fire in a bottle. HAHHAHAH, you say, oh I've had moonshine before. Fuck moonshine and the donkey it rode in on, because baijiu, like many other things Chinese, was made two thousand years ago and has not been improved upon since. People two thousand years ago drank to go blind because life sucked. Thus: Baijiu. 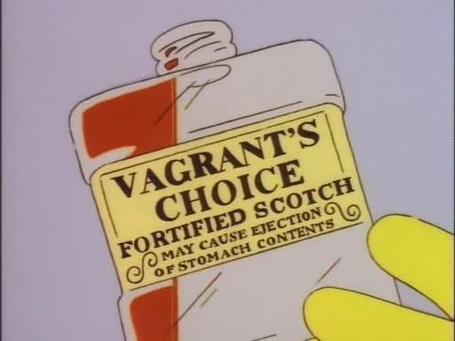 Redolent of industrial aromas compared to "paint thinner" and "something a hobo stole off a factory truck," baijiu is one of those liquors politicians periodically worry about since it costs nothing, soars around and above 100 proof, and can be consumed easily while high on methamphetamine and barreling along in a truck full of nuclear waste headed to Tibet. They should worry, since it's mind-obliterating powers have inspired reams of drunken Chinese poetry. A sample, from Li Po.

Holy fuck: my ass hurts, and I woke up
In a shed filled with strange chickens.
Money gone, head shattered
I'm told I ate my own pants on a dare.
Baijiu, again.

When you become too concerned about the Chinese working 18 hours a day and taking over the world, remember that sleep-deprived people make terrible decisions, and that beneath their adamantine exteriors a lust for baijiu and gambling on cockfights lurks.

Holly: [YOUR NAME HERE]. We extolled the virtues of Firefly Bourbon sight unseen a couple weeks back, and now that we've actually sampled it, a crucial question arises: If an Arnold Palmer is tea and lemonade, and a John Daly is sweet tea vodka and lemonade, what do we call sweet tea bourbon and lemonade? The best we can come up with so far is John Daly Passed Out In A Hooters Flowerbed, but that's a trifle unwieldy. Suggestions welcome. Our generation needs its signature cocktail properly monikered.

Orson:  Flat-iron steak. Relatively cheap beef that cooks quickly no matter your taste, since our definition of cooked is "waved over the grill," and understand that some people out there enjoy a piece of meat that has been raped by the heavy hands of grill-pressing philistine. These people have no souls, but don't let it diminish the appreciation of a good, basic Flat-iron done well without being well-done, especially since the cut--which can be a bit on the thin side--benefits from proper saucing. We tried this (http://www.foodnetwork.com/recipes/giada-de-laurentiis/flat-iron-steak-with-red-wine-sauce-recipe/index.html) with it this week, and it curled the toes in the way that only a sauce loaded with butter and red wine can.

Holly: Tacos al pastor. We would write a thousand-word paean to these little marvels, but we're too busy staring.

Lord have mercy, we miss the taco trucks of East L.A. more than we miss most people we knew there.

Holly: It's late for this, seasonally, but who hasn't wondered how a Cadbury Creme Egg would perform in the vacuum of space?

Hall: Well, yes Anderson. We pride ourselves on sound engineering.

Anderson: I bet it could even withstand the force of a train running into it at a hundred miles an hour.

Hall: Well, yes, I certainly hope so. There'd be only one way to find out, you know.

Anderson: They won't. That was arsenic.

[THEY FLEE THE COUNTRY]

Holly:  NASA's Puffin, an adorable electric personal aircraft that will allow the operator to fly about like they've got a jetpack strapped on without mussing one's coiffure.


It's also named after a cute bird, so it's got that going for it.

Holly: Strunk & White's Elements Of Style. When not writing in slangy internet capacities, we are actually quite protective of the English language. Forget those newfangled Eats, Shoots, & Leaves bitches. You wanna get your style right, you get it right with the OGs of grammar.

Orson:  Thanks to Treme we've been in a New Orleans mode. Thus two recs: James Lee Burke's Dave Robicheaux series for stellar bayou noir, and this astonishing version of "Big Chief" with Professor Longhair, the Meters, Dr. John, and Earl King and his stately bouffant on lead vocals.


If TCOAN weren't around and we could peruse Youtube for our future wife pulled from history's annals, we might just decide on the background singer in red. IF--