Share All sharing options for: USC REPORT DELAYED, WORLD WAITS FOR NOTHING

Akron, beware: USC's on the NCAA's plank, and there's no telling how many inches they'll be forced to walk down it before they are called back, handed a mug of grog, and invited to watch your arbitrary hanging off the yardarm.* 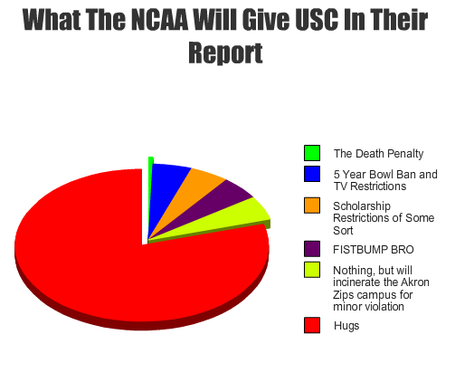 The NCAA report that was supposed to come out this week on USC has been pushed back to later in the month, presumably to allow for further documentation of all of the ways Reggie Bush wasn't taking a prohibited benefit in living in a house paid for by an aspring sports marketer because no one knew he was doing it . This is also known as the Scathing Curry Fart defense, and is well-known to inhabitants of tight elevators everywhere.

Sources tell us that around page 46 the thing just consists of take-out menus, scanned centerfolds from old Club magazines, and the Myspace page of an intern from 2004 printed out on 49 non-consecutive pages. It should be riveting reading forward and backward since Club in its day was way underrated and because it will be full of fascinating bits like Pete Carroll saying that after his All-American season in 2004 Bush was just "a young guy growing up in the program." Yup. Young guy running 25 mph down the sideline. Just a dude.

We have no idea what's coming, but using recent history as any guide has us leaning towards nothing whatsoever in the way of serious punishment for anyone involved. The last serious hammer from the NCAA fell on Alabama in 2000, and grading the NCAA's behavior re: violations on the basis of Alabama's history would be basing your understanding of sex on Bertolucci's Dreamers.** If you now see the NCAA with a picture of Nick Saban taped to its penis, you're welcome.

In summary: yeah, assume we're still in featherweight territory until reality proves us wrong, hysteria over OMG USC IS GOIN DOWN Y'ALL subsides. It's one of the oldest recurring ghosts in the offseason's cast of phantom storylines, and has the fewest actual appearances in the script.

*Calm down. You've done nothing but refuse to take Holly off your mailing list, Akron. You're just an example of the kind of small program the NCAA is fond of obliterating.

**You know there's a Crimson Tide joke in here, and if you're already seeing it, you're welcome again.