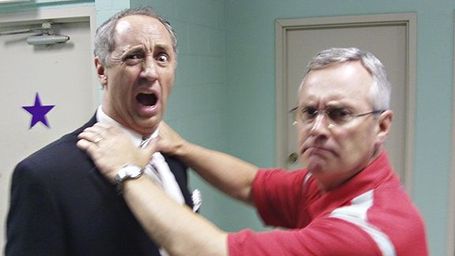 Take one look in the hardened eyes of JIm Tressel and tell me he hasn't killed at least one man in the name of vengeance.

CWCID: Credit where credit is due for the abbreviation-impaired, and the category represented by including an actual Paul Finebaum angerbait column with some real merit, especially on the Les Miles side of the equation. (Richt's case with Georgia fans seems one part media boredom, one part ten year itch in terms of their successful but bland marriage.) Miles probably has another two years, though Gary Crowton may not if the offense continues to suffer from the erectile dysfunction it has since Matt Flynn graduated. He's the sacrificial lamb here, or whatever other meat you care to butcher, slather in cajun seasoned butter, and slow roast in an iron pot for eight hours.

We remain unconvinced that Richt is in any real trouble so much as caught in the malaise of raised expectations and one spectacular flop in 2008, which should haunt UGA fans because Matt Stafford and Knowshon Moreno and POOF IMPLOSION. Of all the teams that could have been in the SEC in the '00s, it's hard to remember one with that much talent coming up shorter of admittedly lofty expectations (Florida 2001 comes very, very close, though.)

IF THE SEC IS A WAGON TRAIN. And if Vanderbilt is the Shakespearean actor with the silky, uncalloused hands doing vaudeville to keep the ladies and children entertained 'round the campfire, then sure, you let the Apaches of the Big Ten take 'em into the prairie night if'n they want to go native. There's no merit to it, but if there is a defector among us, let it be that one.

/Ramius says my what an unfortunate accident.

I WENT TO MATCH.COM AND THEY SAID YOU WOULD HOLD MY WEED. It really should be a question on there, especially if you're planning to ask the girl to hold for you while the police pull your weed smoke-filled car over on the Indiana Toll Road. BTW, everything sounds more grim and Springsteen-ish if you add "...on the Indiana Toll Road" in the Springsteen American Troubadour growl/whine after it.

THE FIRST DAFFODILS OF FOOTBALL SPRING: They approach.

YOUR DIET JUST GOT FOUR THOUSAND TIMES MORE VITAMIN VICTORY. Stanford will be on ESPN four times next year, while USC will have eight games on the network's conglomeration of channels. Having more Pac-10 games on ESPN spares us Versus coverage, though sometimes listening to Petros Papadakis call a game does have the pleasant side effect of making our usual post-Football Saturday arson binge all the more hateful.

TAKE DENARD OFF ALL WATCH LISTS. Everyone knows dreads make you faster. It's some kind of Caribbean Metropolitan Area exemption/inversion of the laws of physics. Because black dudes have hair options we crackers do not, a request: EDSBS will bow down and worship the first player to go full Kid from Kid 'n Play. This cannot be half-stepped: there must be altitude on that tower of power and definition. Nevertheless, the offer stands.