Kiffin: Thanks for meeting with me right after practice.

Gonzalez: I'm walking home. You're walking with me. I don't know if that counts, Coach Kiffin.

Kiffin: I know you're committed to Arizona.

Gonzalez: Yup. Been committed for over a year, coach.

Kiffin: I know they say they care about you. But did they offer you when you were in sixth grade?

Gonzalez: No, coach. No one offers sixth graders football scholarships.

Gonzalez: I really just want to get home and shower, coach. I appreciate it, but--

Kiffin: I just wanted you to meet someone very special to me, Jaime, before you decided completely on going to school in this state.

Gonzalez: There's usually not a tortilla stand on this corner... 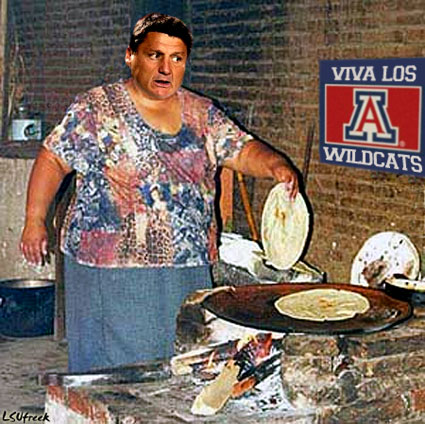 Kiffin: I used to live here, Jaime. Phoenix was a special place to me, and no part of it was more special than walking from...um...what's your high school again?

Gonzalez: We're in Tempe, coach. He's got the propane burner way, way too close to the gas there, by the way.

Kiffin: She, Jaime. She's a woman and she'll be addressed as such.

Kiffin: Anyway, Tia Edwina was like a second mother to me, and I worry about her every day now. You see, she's what you call an illegal alien, like my wife Layla was before I boned her and made her an American citizen with my dick.

Jaime: Seriously, you don't have to do this...

Four men who look suspiciously like football players in shirts that say "POLICE"  jump from a car that pulls up to the curb. They kick over the tortilla stand and begin beating Tia Edwina.

Jaime: I've got ten dollars on Ed--um, "Tia Edwina"--taking them all, coach.

Kiffin: Do you want to live in a state where this could happen, Jaime? Or are you going to come to USC where we accept everyone as long as they're willing to work, Jaime? CAN YOU LIVE IN A POLICE STATE LIKE THIS?

Jaime: I won't tell anyone about this. You know my family's been here legally for four generations, right?

Kiffin: We're talking about my family, Jaime. Tia Edwina is like a mother to me. In a way, she's a mother to us all.

Jaime: I think that propane tank is going to explode. Might want to tell Tia Edwina there.

Kiffin: We're not afraid of a little fire at USC, Jaime. Or of being explosive. That's why we like you.

Jaime: I'll be behind that wall over there if you need me.