IT'S NO FUN. Other coaches will use Arizona's new ID laws against them in recruiting? No, certainly they wouldn't. Now, would they threaten to call INS or local law enforcement on immigrant recruits' families if they should decide to go elsewhere, or even blackmail a recruit with it? No, no human would stoop that low. Lane Kiffin? Sure. Humans? No, certainly not. Then again, they could do that before the law, so it's always been on the table for "aggressive recruiting" for Arizona prospects.

BURN THEM AND NEVER LET US SPEAK OF THEM AGAIN. Florida will feature no grand revamps of their uniforms for 2010. Presumably this includes the hideous Turbo Tudor "F" helmets and white unis they wore in the SEC Championship game, where the disorienting logos convinced Florida they were, in fact, Furman and should play like the Purple Paladins. Let us have priests excommunicate these rags, burn them in a sacred fire, and then let the maw of history obliterate it with sweet forgetting. 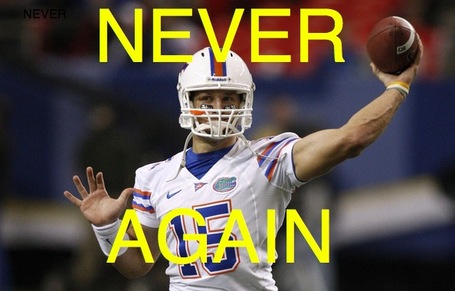 MY ASS IS LITERALLY MADE OF FIRE. Speaking of sexual assault in front of 85,000 people: Alabama will be playing Georgia State this year, and you might want to look away because it will sound like the first time two men decided to have sex.  (It's Will Ferrell and Norm MacDonald. Not having sex, mind you...or at least I think they're not having sex, or at least it's just the audio. NSFW isn't really necessary here, right? Your boss will understand Norm MacDonald saying "Do you have a vagnina?" coming out of your speakers.)

BECAUSE YOU DON'T HAVE ANYTHING ELSE TO DO. Rumor-chasing is underrated, as it stimulates the mind, forces capillary growth in our brain, and develops the critical instincts. Additionally: IT'S MAY 11th. We promise to chase every single Big Ten rumor we can because it's not like you want to work or anything. BTW, the Big 12 has heard nothing from Jim Delany.

BECAUSE THEY HAVE NO MONEY. Arkansas is staying put unless the Big 12 reworks their revenue distribution structure, something that will happen when Texas unlearns the value of money or suffers a mass traumatic brain injury.

OUR MONEY'S ON SABAN. Because he'd have an extra hippo or two greyshirting on the side. ducks brick