The Big Board is brought to you by Brian, the Boardmeister who has been testing the limits of pants fabric strength in the good way for over three decades. Updates and scoring for the Fulmer Cup follow. 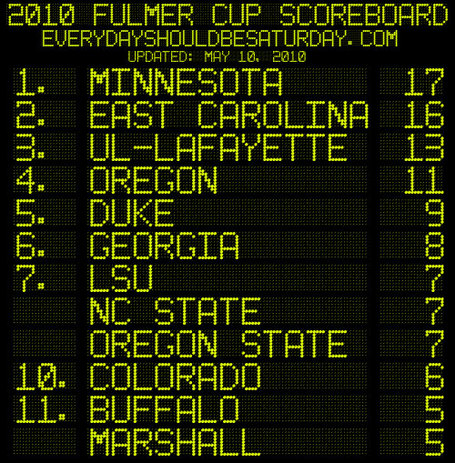 BUSY BEAVERS HA HA GET IT? Oregon State, having watched Oregon act out and get all of daddy's attention for the first portion of the Fulmer Cup season, have decided to start dating dangerous jazz musicians, smoke a little reefer, and cruise skeevy juke joints with who knows what kind of hoi-polloi.  A girl could get into trouble like this, but you can't tell a determined skirt like this what to do when she's hopped up on chocolate malts and the dumb vigor of youth!

A busy week for the Beavers (HA HA HA shave and a haircut/ fart noise) began with the arrest of current defensive tackle Brennan Olander and two former Beavers in the felony theft of an Oregon State golf cart. We weren't aware golf carts could be worth enough to merit felony charges, but in Corvallis they're wrought of platinum, hot sex, and fine dreams, evidently. The theft is undoubtedly the result of a drunken caper, but the parking job, sirs?

The black and orange cart was reported stolen March 14. At 3:54 a.m. on March 18, Oregon State Police found the cart, damaged, in a parking spot for the handicapped in the 2800 block of Southwest Western Boulevard.

In a handicapped spot? FOR SHAME, gentlemen. Those are reserved for bros with their grandmother's handicapped permits to park right in front of the gym and get to the squat rack faster, not your drunk, golf-cart flipping asses.

The second charge comes from quarterback Peter Lalich, who gets the ever-exotic DUI on water. DUI is wrong, but DUI on water just sounds so much more festive than a regular freewheeling auto DUI. Like you should be holding a jug of grog and holding a lass about the bustle when the red and blues go on behind you as you merrily weave over the boundary buoys of the swimming area and teach the bobbing, terrifie youngsters the importance of evasive action in a maritime environment.

The two felony charges  add up to six points at three each, but a bonus point for the oceanic merriment takes Oregon State's desperate plea for attention to seven points total.

HITTIN' GIRLS: K-State's John Hubert gets a domestic battery charge of undetermined value and intensity, so for the moment we'll shoot the gap between "light tusslin'" and "Ike Turner Kickboxing" and award 2 for the misdemeanor and one for the hittin' girls bonus to get K-State at three. Don't hit girls, unless they're Isabella Rosselini in Blue Velvet and asking for it, and even then it's going to be weeeeeeiiiiird.

ONE MORE POINT: for Arkansas and their dual possession arrest last week.

Otherwise, all points are awarded, including the Illinois felony stolen goods possession charges (which were mentioned last week and were worth three points.) The Fulmer Cup has been adjudicated: go in peace.