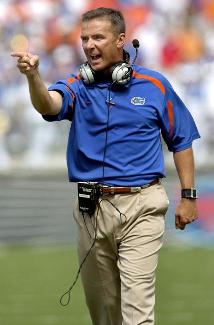 By now you've probably seen some of the reports from Gainesville of a fiery post-practice speech in which Urban Meyer informed his Florida players that they'd be "done" if they were caught using drugs or weapons. Harsh words, indeed, but our sources deep within the Florida athletic department advise us that a little context might be in order.

For example, when Meyer was quoted as telling his players that if "You smoke marijuana, you won’t play football," we have it on good authority that Meyer's actual words were "You smoke marijuana, you won't play football well." He is, of course, correct: Marijuana has been proven to reduce cognitive speed and impair motor skills in everyone except Percy Harvin. Meyer went on to advise that all marijuana consumption thus take place after scheduled practices or games, and off-campus if they can help it.

The "you're done" part of Meyer's speech, too, appears to have been taken out of context by reporters. According to our sources, that part of the speech was not an admonition but rather a bit of instruction: "You roll one fatty, you're feeling nice and buzzed after that, you're done," Meyer told his players. "You probably don't need another one after that. You start carrying too much of that stuff around, all of a sudden it isn't possession anymore, it's intent to distribute." Similarly, with regard to firearms, Meyer advised his team merely to brandish them as an intimidation tactic, and only discharge an actual round as a last resort. "Nine times out of ten, you simply pull out the shotgun, rack that son of a bitch, and you're done," he said. "Guy's gonna hightail it out of there and chances are you'll never see him again. No need to press the issue."

Starting next week, signs reading "One Toke and You're Done" and "Rack It and You're Done" will be posted over the tunnel leading from the locker room at Ben Hill Griffin Stadium, with the players slapping them for inspiration on their way to the field.

We hope this clears up some of your misconceptions.