OTHER [STUFF] NICK SABAN DIDN'T HAVE TIME FOR

Share All sharing options for: OTHER [STUFF] NICK SABAN DIDN'T HAVE TIME FOR 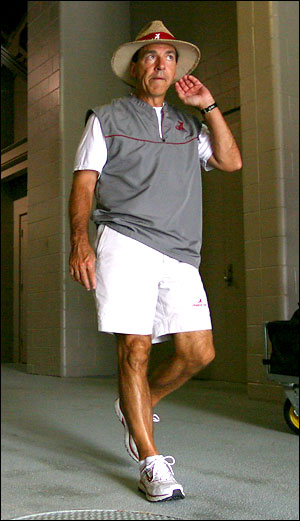 These types of stories are a staple of the offseason -- particularly when the coach in question has just added a crystal football to his trophy case -- but we have to confess some fascination with the litany of things Nick Saban has blown off in favor of coaching. Tickets to the Masters? Steve Spurrier wouldn't just blow off practice for that, he'd walk out in the middle of a game if he had to, tossing his headset to Shane Beamer and ordering Spurrier Jr. to grab his clubs. Saying "Thanks, but no thanks" to dinner with the president back in '06? Somehow we'd managed to miss this tidbit, but less than 10 seconds' worth of Googling reveals that yes, it did happen:

A quiet Sunday dinner at Joe’s Stone Crab, arguably one of the finest seafood restaurants in Miami, possibly in all of Florida. Actor Andy Garcia, Univision television personality Don Francisco, NFL Hall of Famer Dan Marino and others would be on hand to dine with President Bush as he came through town. Celebs, the Prez and all the free crab you can eat. Who could turn down such a tempting offer?

"That [would have been] a great experience, but it's a personal experience," Saban told the Miami Herald. "My obligation is to these players right now. Once we commit to camp, I'm out of everything. This is what I'm doing, this is what I'm committed to, and I don't have to make exceptions for anything or anybody relative to what I'm asked to do outside of here."

Yup, Nick Saban wouldn't blow off the Dolphins for President Bush. He would, however, blow them off for Alabama five months later, and we're steeling ourselves for the onrush of Tide fans storming the comments thread to claim a 37th national title by virtue of Tide football therefore being more important than the presidency. HEY LEADER OF THE FREE WORLD WE JUST BEAT THE HELL OUT OF YOU!!! RAMMER JAMMER &c.

So that got us to thinking, what other opportunities has Saban's football obsession caused him to miss? A little more Googling uncovered some answers:

June 20, 1970: Preparing for his first season as a starting defensive back for Kent State, Saban turns down a friend's offer to set him up on a blind date with aspiring actress Farrah Fawcett. Instead, he spends the evening working on his quads in the KSU weight room.

September 25, 1986: A Detroit radio station offers a Yamaha dirt bike as a prize for correctly completing a lyric to the Journey song "Wheel in the Sky." Saban, a huge Journey fan, knows the correct lyric but is too engrossed in film study with his Michigan State defensive players to call in. The dirt bike goes unclaimed.

November 5, 1996: Saban receives a last-minute invitation to the victory party for re-elected President Bill Clinton, but while getting ready for the party, he suddenly has a flash of inspiration about how to fix QB Todd Schultz's throwing motion and rushes to his computer. By the time he remembers the party, Clinton has long since departed. (However, his Michigan State Spartans go on to defeat Indiana 38-15 the following Saturday.)

August 13, 2002: Ed McMahon shows up at Saban's home in Baton Rouge with a check from Publisher's Clearing House for $1 million, but Saban is away on a recruiting trip.

March 17, 2008: Saban gets a hot tip to short-sell stock in the Bear Stearns investment bank, but forgets to call his broker because he's too busy making Jimmy Johns run wind sprints for missing the previous day's practice.

February 26, 2010: Saban declines an invitation from a wealthy Alabama booster to spend the week at his villa on Chile's Pacific coast. OK, maybe that one turned out for the better.

April 3, 2010: Apple CEO Steve Jobs calls Saban offering to send him one of the very first iPads off the company's assembly line. Saban says "No thanks" and resumes watching his recruiting video.