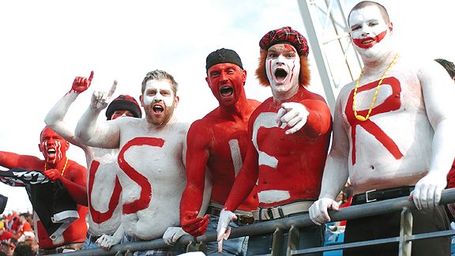 So Bret Bielema wants Wisconsin and Nebraska to play each other, and we think this is a fine idea. Not just in the name of I-A schools scheduling proper out-of-conference competition, but because these two fanbases were sort of made for each other.

We've always found Nebraska types to be extremely knowledgeable fans of the game and, apart from those in our immediate vicinity at the 1997 Orange Bowl, consistently pleasant to talk X's and O's with. They do football well. And what does Wisconsin do well? Drinking. Madison is packed from stem to stern with professionals who can hold their gameday beer like no other population. The thought of a fall Saturday spent in erudite discussion while bingeing on microbrews to the point of unconsciousness is a grand one, and we wonder why more athletic directors don't seek to fill their schedules with personality-compatible matchups.

There are a few such rivalries already established. The key-rattling, down-in-front propriety of Michigan and Notre Dame. The cheerful hooliganism surrounded by gripping poverty of Marshall-West Virginia. Florida and Miami, when it happens, needs no further explanation for its grandeur. A new series between Penn State and Bama will pit two of the country's most tradition-proud, genteel-ish brute squads against one another.  Ten more matchups whose regular existences would enrich the fabric of football, after the jump:


We're swinging wide with the stereotypes here, and have undoubtedly missed a few. Throw out the fanbases you'd most like to see collide below.