Share All sharing options for: LUTHER CAMPBELL: THE EDSBS INTERVIEW

We spoke with Luther Campbell, aka Unkle Luke, longtime Miami football fan, occasional booster, youth football coach, and rapper/DJ/producer. We asked him about Canes football, youth football in Miami, solicited some parenting advice, and where he would send us in the Miami area to seek gentlemanly diversion. The transcript follows. 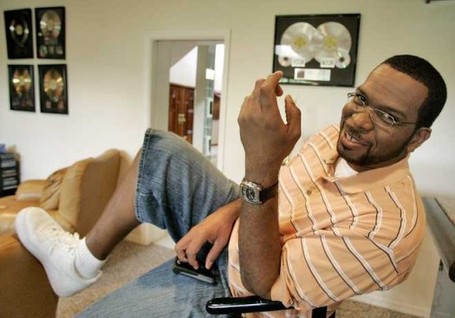 OS: When did you become a Miami fan?

OS: Who's your favorite Miami player of all time? Being as close to the program as you've been at times, I know that has to be hard--

LC: No, it ain't hard. That's easy. It's Jerome Brown. Me and Jerome developed a bond, a friendship over the years, because when people talk about Miami, when they talk about swagger and attitude, all that started with Jerome. He created all that: the chip on the shoulder, the "us versus the world" attitude, being aggressive...that's all Jerome Brown.

Jerome's a friendly guy, a helpful guy off the field. If you loved the U, he loved you, but if you didn't then to hell with you. You had to have the same passion he had for the school or he'd beat your ass in the locker room. It's hard to explain anything about the U without starting with Jerome Brown.

OS: You were involved with the The U, the ESPN documentary. How involved are you with the making of part two?

LC: I'm helping the guys get Miami players to talk to, telling them to talk to them.

OS: Because they won't talk?

LC: People don't realize that Miami players in the NFL and people who played in Miami won't talk about what happens in Miami. They have to talk to another player or someone like me who says "Yeah, it's okay," and then they'll talk to the guys.

OS: This one will be on the Butch Davis years, a time when you weren't as involved with the program.

LC: I don't like the Butch Davis years. I feel like the whole thing was a stab in the back, to come back and coach the team and not coach the way Jimmy Johnson ran it. He did everything totally opposite of what Jimmy did. He didn't allow anyone around, didn't allow former players around. You can't turn Miami football into Duke overnight.

It was like the coach was part of the media. He was in the locker room all those years, and for him to be there all that time and then do things differently felt like a stab in the back. He made them run around out there like straight pussies. You can celebrate to a degree. You can talk shit to a degree. I didn't like it, and if he doesn't like it, then fuck it. I don't care.

OS: So how many home games to you make it to now?

LC: I go to all the home games unless I'm touring or something like that. Sometimes I like looking at 'em on tv. Being a high school football coach now, I like looking at the replays to see how things happened on the play.

OS: Talk a little bit about your coaching career.

LC:  Yeah. I trained myself coaching at the youth level first. After about 6 or 7 years off I went back to coaching linebackers at Miami Central High School. I train my high school kids the same way I trained my youth kids: by giving them as much information as they can handle. They're like little grown men, but you've got to keep them intrigued by giving them as much information as possible. Their attention span is hard to get.

OS: Wait, wait. You got your youth football teams to watch film?

LC: Oh, yeah. My kids in the park watched film. All my kids learn to watch film. When my kids leave our team, they're going to start in high school. Not on junior varsity, but on varsity. I make all my kids watch film, and it's some unheard of shit. The most important thing is learning to watch film. I'll start 'em at 13 or 14 watching film, and you can see it in our kids on film. They see the screen before it happens, they see the angles on the play.

OS: How long have you been involved in youth football in Miami?

LC: Yup. 1985. Everyone gives Snoop Dogg credit for his league, but he's only been involved three or four years. I started the Liberty City Optimists 25 years ago. I always said I'd do something like that the minute I started making money in the music business. I was bused to Miami Beach and played at Flamingo Park, but my other friends didn't have organized football, and it was something I always wanted to bring here.

OS: People are aware of how intense something like West Texas football is thanks to Friday Night Lights. Talk about the intensity of Miami youth football and high school football. People really do gamble on games still, right?

LC: They'll put more money on a 4 year old's game than on a high school game. Football in Miami is a right of passage like basketball in New York or hockey in Canada. You play football. If you don't play football, you go to the band. if you're not in the band, you become one of the most notorious thugs in Miami history. That's how it is. You got big bookies involved, forty year old men involved.

A kid who plays football in Dade county knows pressure. People see Jacory Harris and say, "Wow, he looks so poised, so cool, where did that come from?" People screaming, a place like the Swamp, a hundred thousand people yelling at you. Shit don't bother him. He came from Dade county, that's why.

You play on a field. Grown men watching. No police. Everybody's betting. It's the most intense game around. Their dad's betting, their mama's betting, some guy coming up to you after the game says "Motherfucker, you fucked my money up." Everyone ends up on the ground at the end of the game sometimes. Friday Night Lights is a joke compared to Miami football. Lots of people have lost their lives over it.

So, yeah. Every kid is aware of the pressure.

OS: I just had a kid. Any parenting advice from a reality television father?

LC: First off, do not put no Florida onesie on that baby.

LC: We have got to get him a Brandon Harris onesie like the one my son has. Guarantee that he's a man. My wife went to FSU, and at a game she put a Florida State hat on him. I nearly lost my mind and threatened to divorce her on the spot. An FSU hat? Fuck that.

LC: I'd rough him up a bit. I mean, he's a baby, so there's only so much you can do, but women want to cuddle him, make him soft. When he falls, let him fall, these ladies won't do that if you don't.  I like it when strange ladies change his diaper and he pees on them and it gets all in their hair. It's like his first golden shower.

OS: Right. Anything else?

LC: Yeah, just let him hang out with the boys, too. That's real important. Oh, and this is new: don't call a pacifier a pacifier. Girls have pacifiers, but that's soft. Boys have mouthpieces. I'm going to trademark that. You ask the kid, "Where's your mouthpiece at?" You've got to train your wife to say that too, because pacifier sounds girly. I'll change that shit.

OS: You're going to make a mint with Uncle Luke's Mouthpieces.

OS: Finally, if I have three places to go in Miami, where are they?

LC: First I'm sending you to the Rolexx. It's on 119th, and it's called the 'Lexx. I'm gonna have to send you during the day, because you might not come back at night. Second, a high school game at Miami Northwestern or Miami Central. You gotta take that shit in.

Third, you have to come watch the Liberty City Optimists play the Overtown Optimists. You have to wear your bulletproof vest. Don't be obvious about it, just wear it, and bring a lawnchair. You sit out with everyone else. Just imagine: everyone sitting in their lawnchairs wearing bulletproof vests. You gotta love it.