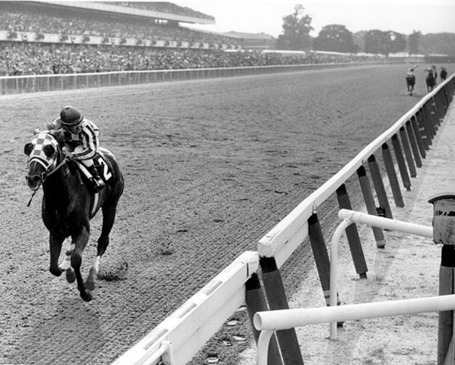 Think of his life: relentless speed, a life time record of 16 victories in 21 starts, complete supremacy over his competition, fame, fortune, and everything else a horse really couldn't care less about, actually. He shares this with you: success really is boring, or so we're told. Should we ever find any we'll let you know.

His sensual life, though, is something to truly envy. Secretariat worked naked for the most part. He rarely ran for over two and a half minutes at a stretch. A magic box in his spacious, well-appointed barn produced a never ending supply of oats and clean water for him. After three years of work, he retired to a life of walking, trotting, shitting and pissing wherever he liked without having to clean up, and constant hot mare-on-stallion. He sired over 600 foals, and not once did any of them ask him for money or call him at three in the morning to inform him that they'd stolen a car, both because horses don't have hands, and because they have no use for cars.

All in all, Secretariat lives the life you'd like to lead, minus the involuntary euthanasia bit at the end. Salute, Big Red: the last to first outside move will still stop a heart if watched while clutching a worn betting ticket.

Holly:  In honor of my sainted mother's birthday, and her gypsy heritage which makes her awesome at a) singin' pretty, and b) cutting bitches up, I give you törkölypálinka, a horrifying pomace brandy that's  basically the Hungarian version of grappa, and nigh-undrinkable. 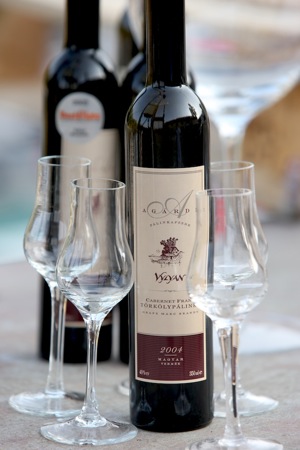 I cannot recommend trying under any circmstances, which (if I know you monsters) means that at least five of you will drink it tonight. 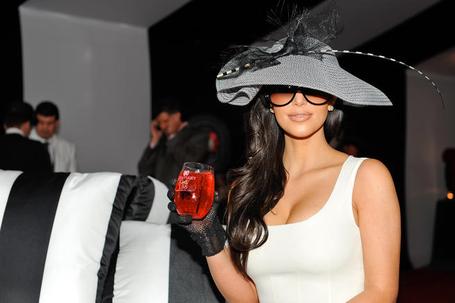 The official drink of the Oaks, the all-fillies race prepping the track for the Derby, is the Oaks Lily, a blatant ripoff of the Cosmopolitan worked up thusly:

Certainly an inoffensive derivative, yes, but it's made better by its sheer drinkability and propensity for winding up in the hands of buxom ladies in sundresses wearing big hats. Additionally, all Derby drinks must be tested by droppability: when drunk, the Oaks Lily glass makes a melodious tinkling crash and releases the pleasant berry aromas of the ingredients. When you drop a julep, children are hit by the shrapnel, weeping ensues, and it smells like you've turned your alcoholic grandfather inside out.

COMESTIBLE.
Orson: Bourbon Glaze. Sauce is, in the terms of food writing giant Jeffery Steingarten, "some next level shit, lawya." Sauces make people boggle at your cooking when all you've done is cooked an acceptable piece of meat and presented it with some camouflage, the culinary equivalent of giving good head and being well-groomed in bed; any lack of quality in the initial ingredients is hence surpassed with a bit of preparation and extra skill, and everyone enjoys the meal a lot more.
So put out and give your dining partner what she deserves: Bourbon Glaze. This goes especially well on bargain salmon, which can be a bit..um...salmon-tastic.
WAAAAA THIS LOOKS HARD---hush. Put in a bowl, stir the shit out of it, and then baste it on during cooking. It smells fucking fantastic, cooks up beautifully, and allows the cook to "test" the bourbon for freshness both before, during, and after the cooking. 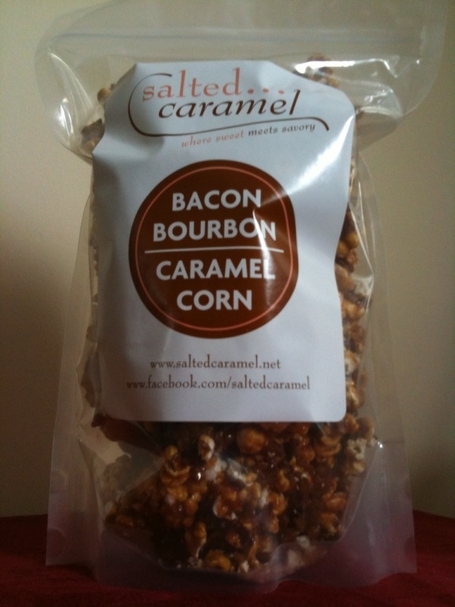 Buy it here. Cardiologists, I am now accepting finder's fees.


Anyone with extra unexploded airbags lying about, please bring them to our first tailgate this fall. Thank you for your attention to this matter.

Orson: The Rocket Sled. Ohhh, the rocket sled. We need one of these yesterday, and we need your car. Ask no questions. You will not regret our decisions in this matter.

TRANSIT.
Orson: SUDAN AIRWAYS. AKA "Sudan Scareways," the most frightening airline in the world. Failing that, fly CrynAir, because FUCK YOU THAT'S WHY.  Actually, if you're a picky sort, just peruse the EU's list of blacklisted airlines and pick your own. We're especially fond of the Congo's Mango Airlines. 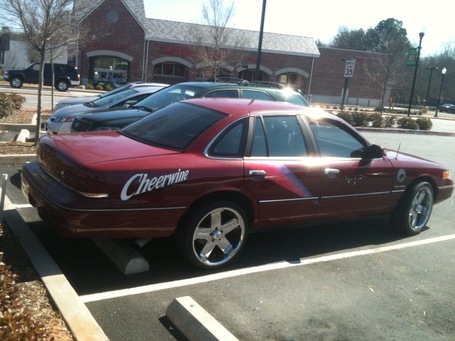 Your argument is invalid.

Holly:  Garden & Gun, which is an actual magazine that I bought because it was called Garden & Gun and then proceeded to purchase subscriptions for everyone I know. Need to round out your Mothers' Day gift ideas? Buy her a subscription and grab her a copy of at the newsstand to hold her over until the first issue arrives. This magazine introduced me to the above-mentioned BACON BOURBON CARAMEL CORN, so you know they know what's up.

Orson: Sonny Yew's Ip Man. The robo-punching at 2:26 is a skill I both crave and will never have.