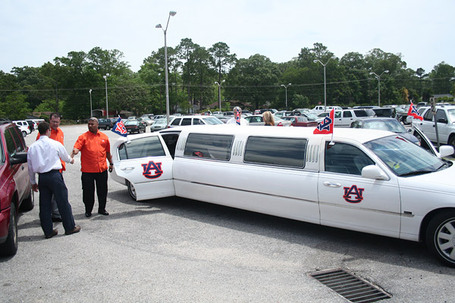 The NCAA's passing of a rule limiting visits by coaches to two at a time and a follow-up rule limiting the use of "limousines or extravagant buses" means the end of the Tiger Prowl, the country-fabulous white limo and bowling shirted tour of Alabama begetting what may now be known as "The Chizik Rule." The NCAA shall not rest until every SEC coach has a rule named after them, and the coaches of the SEC shall not rest until they oblige the NCAA by doing dumb shit like this. (And for the millionth time, white limos are for Hank Williams Jr. and rap videos made in 1990.)

Please note that while buses have been banned, vannin' is still wide open for the taking. We recommend something like this, but TigerEagle-ish.

IS THE BIG TELEVEN ALT? IS THE BIG 12 "DERIVATIVE," OR "IRONIC?" For Hipster Runoff fans, the Hawkster Runoff piece on BHGP is an eerily accurate facsimile of Carles' hipster patois.

Is this a subplot of Lost?

KUDOS FOR CHELSEA. If the ACC adds Chelsea, then the SEC has to get three teams from international soccer at the very least: Barca, Boca Juniors (for the bunda, always, always for the bunda,) and Fenerbahce, because playing in Hell is a superb homefield advantage. The Big Ten can then take stultifying Italian teams, while the Big 12 can take free-form, hard-gunning African squads. (The Big East gets MLS.)

YOU'RE ALL FALLING SHORT OF THE BACARDI BOWL. The Kraft FIght Hunger Bowl is real, but let it be known that even a slattern as indiscriminate as the NCAA says no once in a while.

PHOTOS: THEY ENTERTAIN. Steve Spurrier looks FABULOUS in this photo.  He also is now eligible for "dudes who look like old lesbians" consideration.