WE ARE NOTRE DAME WHOA OH OH OMG THIS HAPPENED

Share All sharing options for: WE ARE NOTRE DAME WHOA OH OH OMG THIS HAPPENED

0:13 I can't even begin to describe this. It is a Chumbawumba song fed to the Black Eyed Peas playing a Mexican Quinceañera in Hell. Then the Black Eyed Peas eat Nick Lachey attempting a clubthumping anthem. This gives the Black Eyed Peas explosive diarrhea; as a result, they spray-poop the entire mess onto an Elmo record. This then is combined with the noises of Satan's galley slaves moaning beneath the fiery whipstrokes of their demon masters, remixed by Ke$ha, and rapped over by Fred Durst.  This is not good.

0:46 White sunglasses. It's a pattern. I don't know who this "Freekbass" person is, but I suspect he's DJ Qualls with a gluten intolerance.

0:57 Remember when we said "Just hit play?" HAHAHAHA YOU NOW HAVE TO MAKE SOMEONE ELSE WATCH THIS OR YOU WILL DIE IN ONE WEEK.

1:42 Tucker Carlson is rapping about Notre Dame. Am typing this with one eye after spearing one out with thumbnail from horror. Totally worth it. 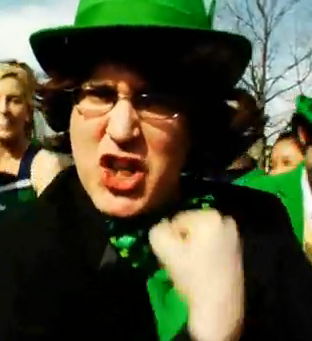 It's easy to go with the whiteness jokes here. It really, really is. It's the upper cut delivered to an open chin. It's the fat joke at a Weight Watchers' meeting. It's a Florida jorts joke and Arkansas pig rape jibe all wrapped into one. I know: it's the data entry position of comic efforts.

Sometimes, though, those spreadsheets have to be filled out, young man, and sometimes you have to say: this broaches a new and bold age of blancitude we may have to cite as the point where whiteness, caught in a steady state since 1950 or so, explodes into a bold new period of evolutionary bloom.  This rapper, whoever he is, is Australopithecus: together in some exciting future, we will study his bones with awe and respect. 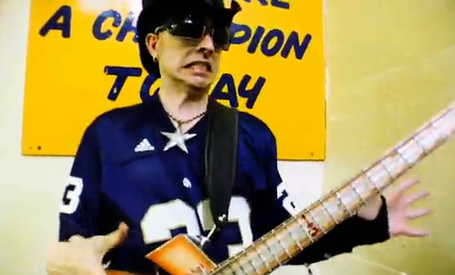 HE'S HAVING AN ANEURYSM YESSSSSSSSSSSS THANK KALI IT'S OVER---

2:00 Dammit. Instant respawn. DJ GlutenQualls cannot be taken down with the simple catastrophic rupture of one major brain artery.

2:22 If John Lennon drank corn syrup for three weeks, shaved his mustache, and then showed up for the Sgt. Pepper's cover shoot.

3:12 Brian Kelly, you had no idea it would come to this. You couldn't have.

3:27 HELLO POINTLESS TURNTABLE SCRATCHING. You're biting Incubus at this point, and that's a bite no man, woman, or institution should ever be reduced to taking.

3:40 Saving the one good eye by looking away from the video for a second, the description of the video on what is, mind you, Notre Dame's official Youtube channel, is this:

Freekbass wins a CEA Freekbass won for Best R&B/Funk act at the 2009 Cincinnati Entertainment Awards (CEAs). Thank you much, much to everyone who voted and for your continued support !

The remaining members of the Ohio Players all died sudden, painful deaths just reading that.

/clearly hates self and wants to die.