The Big Board is maintained by Brian, who is hung like Reggie Nelson. If you ask them nicely, they'll move them and bring back the sun. 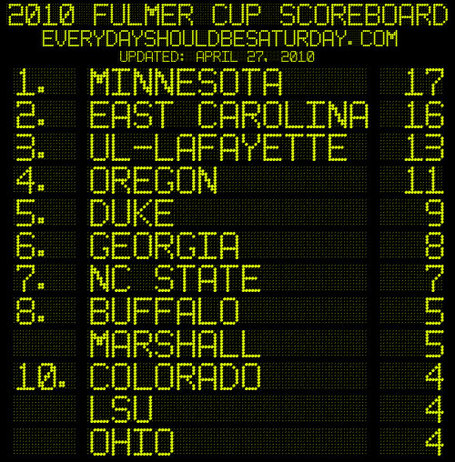 Young Sweezy and three other Wolfpackers--including Markus Kuhn, German national and defensive lineman--were arrested for marijuana possession this past weekend, a single point offense with the group bonus here equalling five points total for NC State. We might up that if we find out one of the bongs is the one with the stoned Pink Panther head as a base, because HE LOOKS SO HIGH BRO JUST LOOK AT HIM HAHAHAHAHA---

/turns on Tim and Eric

SOOOOWEEE VICODIN. Or something like that, since Hunter Miller's arrest is fresh and we're not sure what "controlled substance" he was caught in possession of last night in Fayetteville. It's one point  for the moment pending any details. If Arkansas helps him defend the case like they defended anything on the field last year, Miller will be given fifty years hard labor and set on fire.

HELLO MR....MCLOVIN. UGA has a walk-on lineman, Josh Parrish, get caught with booze underage and a fake ID, thus earning two points for UGA and confirming that the use of a fake ID in Athens is a very, very stupid thing considering the proximity of thousands of thirsty students to a hive of wary, ID-inspecting bars.