BEEFCAAAAAAKE. Clausen's precipitous drop at the draft explained due to EXTRAORDINARY WEIGHT GAIN. 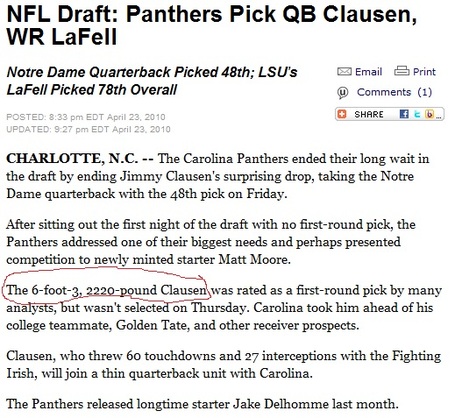 No wonder Navy made them look slow and indecisive two years running.

HE'S STAYING HE'S NOT EITHER WAY GEORGIA STILL WON'T ATTEMPT RISKY "PUNT RETURNS." Logan Gray's status as best we can figure: he's seriously thinking about leaving UGA with just one scholarship qb, has been asked to stay, and is doing so for the moment with a heavy lean towards leaving anyway. Using the stream and talking to people (<---actual quasi-journalism!), that's where he's at for the moment.

NO MORE WHITE LIMOS: IT'S STRICTLY ENERGY DRINK PROMOTIONAL BUS FOR AUBURN. The Tiger Prowl will no longer use the Hank Williams 1987 White Limousine for Tiger Prowl, but will instead use a bus decked out with Auburn logos that, from a distance, could be easily confused with an energy drink promo bus. If Trooper Taylor does an xtreeeeem dirt bike jump over it at tour stops, the transformation of Auburn football into AMP ENERGY DRINK ROARGGGH will be complete.

OUR MONEY'S ON TOM O'BRIEN BECAUSE GOLF IS BORING. If Auburn hadn't had their coup last year and ousted the best golfer in the conference, the betting here would be easy. Unfortunately, Tuberville has been exiled to Area 51, and thus the money goes on Spurrier out of the SEC and Ralph Friedgen out of the ACC as long as they let him throw the ball off the tee like the huge toddler he is.

CUPDATE TO COME, BUT: NC State players majored in pharmacy, took on a group project, and were given an "A" by local authorities.