Spring games were numerous, and will be mentioned in a separate post. First, catchup.

FLASH DILITHIUM HAS POTENTIAL. ADDITIONALLY: IS USING MGMT IN A FOOTBALL HIGHLIGHT FILM ALT, OR ALT-ISH?

It's from last weekend, but using "Flash Delirium" to back spring game highlights is a kind of freon-huffing inspired we have to recognize somewhere. in other news, MGMT's been listening to a lot of bad psychedelia and the Return to the Valley of the Dolls soundtrack.

PLAY FOR THAT MOTHERFUCKIN' MONEY, BOYS. Nine Gators were drafted overall, the most in the modern draft era, including Joe Haden, whose own pick history will be printed a thousand times, laminated, and passed out in card form to all recruits for time immemorial:

The Cleveland Browns and head coach Eric Mangini loved him, so much so that word leaked out before the draft that Wilson could come off the board with the team’s seventh overall pick. But an internal split formed between Wilson and Florida cornerback Joe Haden(notes). Team president Mike Holmgren thought Haden’s level of competition in the Southeastern Conference gave him the edge, so he broke the tie in Haden’s favor. In turn, Wilson trickled all the way down to the New York Jets at 29th overall. There’s a $15 million difference in guaranteed money between those two spots. Ouch.

Yes, that's making the bold move indicating that WAC competition might not be up to snuff with the SEC, but context has a way of taking the candy out of the pinata in a most un-fiesta-ish manner. The SEC also led the way among all conferences with 49 picks overall. (The SEC led last year with 37 overall, too.) Conference improvement, thy name is the Big Ten, who had 33 players taken, just ahead of the ACC (31) and the Big 12 (30), who still has that weird aristocratic draft placement thing going on (shitloads at the top, and then tapering off. Very high Gini coefficient there, so to speak.)

Note: very informative graph-thing and numbers over at TSK.

AAAAHHHHHHH KILL IT WITH GARLIC SAUCE.  You'll have to go to Corn Nation to have this explained, but JESUS GET OUT OF OUR NIGHTMARES PEPPERONI NDAMUKONG SUH HEAD. 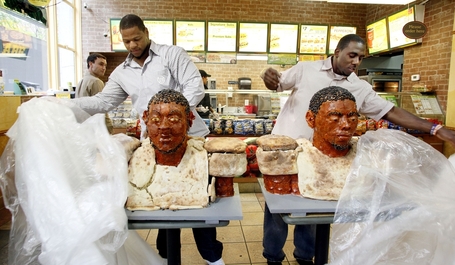 STILL MORE CATCHUP, BUT: Paul Tagliabue's quote about Big Ten expansion as the Big East's hired gun in the PR shootout going on around expansion is simultaneously funny, bizarre, and way, way too late:

"One of the real challenges for the networks is to provide value, but you only provide value in markets where you provide traction," he said. "Is Minnesota and Rutgers going to get a big rating on Long Island? Give me a break. Every game isn’t Michigan and Michigan State." He added, "Am I going to rush home from a tennis game on Saturday to watch Minnesota and Rutgers if I live on Long Island?"

Um...we don't know too many college fans who "rush home from tennis games" to make anything, but years in the NFL bubble will skew your cultural sensibilities somewhat, we guess.

/screams at servant to remove frilly sleeve from teacup