No matter what you put on the field, we are all but certain singing "Party in the USA" before games lowers the ambient testosterone to a point the EPA would consider dangerous for football teams. When Iowa fans begin singing "AND THE BRITNEY SONG WAS OOOOONNNNN" after this year's defeat, you'll only have yourselves to blame, since Iowa stays strong through a rigorous audio diet of nothing but "Move Your Feet." (HT: BSD)

THIS IS YOUR TARGET, TOVARECH. Good lord, Chicago Tribune: Jim Delany looks like a KGB target photo here. Considering he does dress like a schlumpy Belorussian mining official the comparison is apt, but on day whatever of BIG TEN METASTASIS WATCH it bears repeating that Delany said yesterday that there's nothing doing immediately on expansion, and that he was going to go silent until they had the stars lined up blah blah blah you're not getting a shit's worth of info from ol' Delany, kid. TSK floats a few scenarios in response, since Mike Slive has already said the SEC would respond to keep its position nationally.

*WRITES "I LOVE YOU" ON EYEBROWS*

EDSBS has no particular ideas in case the SEC feels the need to expand. Indeed, the SEC may not need to expand at all, especially if the Big Ten's eventual growth turns it not into a glorified, cheese-bestrewn ACC diluted in quality by its size. This could happen, since the drive for BTN eyeballs for advertisers could create some serious discrepancies between the quality of the product on the field, especially with Big Ten schools' penchant for throwing nickels around like manhole covers when it comes to hiring coaches.

In theory, you could end up with a kind of shitty huge conference with very good annual revenue numbers, which sounds like the kind of low-budget, high-yield discount mart approach Delany would take: put in three cents, take out seven, and use proceeds to buy shitty loafers. Maize 'n Brew has ten very good suggestions to keep this from happening, none of which the Big Ten's muckety-mucks will read because the computer is filled with lies, viruses, and pictures of loose young women.

OH HOO BOY DRAFT DAY. Before anything else, let's suggest you follow Todd McShayved today, since liquid cocaine doesn't purchase itself. Second, Tim Tebow could end up all kinds of places, but he won't end up getting Brady Quinn'd since he's going to watch the Draft from Jacksonville, and thus be happy wherever he goes since it most likely will be someplace other than the crotchpit that is Jacksonville. Third, you will get to watch the outside world reduce confident 22 year olds  to insecure stuttering tatters of their former selves, which will be just like the horrible period you had after college when you took that job for the money, but only with a difference of several million dollars and way more sex and cool stuff for the athletes. So, yeah, not like that at all.

ONE AND OH, MR. MCCOY. Though that is a deathless impression of his throwing motion, we'll admit, though nothing compared to the Suh interception run.

WHEN WILL THE PREJUDICE END? Toby Gerhart, too white for success in the NFL. The White Wide Receivers' Association understands your pain, Toby, and asks you to subscribe to their newsletter.

PHOTOSHOP CAN ONLY TRULY CAPTURE HIS EMOTIONAL DEPTH. Rueben Randle, he of the swagged out party, is a deeply emotional person.

TERROR: No idea what this will manifest itself as, but holy shit it could be as epic as the Wikipedia entry on Biff the Wolverine, who was so dangerous he had to be moved to Detroit. <-----AN IMPRESSIVE STATEMENT.

JESUS WHAT THE HELL AM I DOING HERE. As much as Tommy Tuberville loves obscurity--we checked in next to a smiling Tubs at SEC Media Days one year, no one bothering him while Nick Saban was flashbulb'd to death behind us--he has to feel at least a bit disjointed in the bizarro world of Lubbock, especially if there's a paucity of quality golf courses around.

For instance: why you puttin' a confetti snake on that man's head, sir? 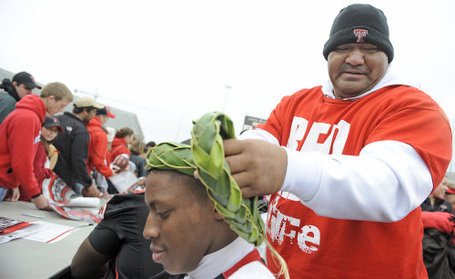 It's a Polynesian thing, btw, which James Cook thought was oh so quaint and OW MY HEAD IT'S BLEEDING AND I'M FACE DOWN IN THE SURF OH ENGLAND YOUR WHITE CLIFFS I SHALL NEVER SEE AGAIN--