Share All sharing options for: FULMER CUPDATE: THE BIG BOARD GOES HAM

The Big Board is brought to you by Brian, who, well, you know...he's that kind of guy. 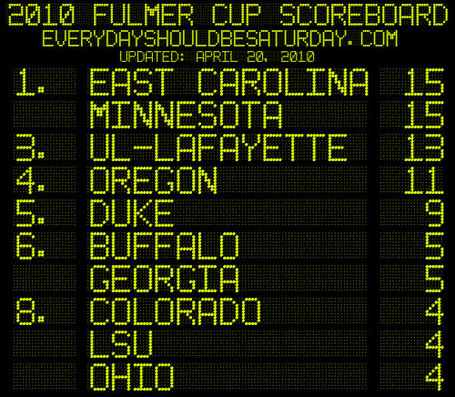 MINNESOTA THAWS AND AND GOES HAM.  Get the temps above fifty in Minnesota and spring fever turns everyone into binge-drinking, moped-raging street banshees. Seasonal madness is one explanation for Minnesota's rip through the Fulmer Cup in the past two weeks, but Tim Brewster's aggressive recruiting of talent could be another, thus proving again the direct correlation between Fulmer Cup points and overall talent level. Ground floor betting on the Gophers top ten finish starts NOW.

Sam Maresh got the Gophers' streak started by racking up not one, but two underage drinking charges in two weeks.You may remember Maresh's name as the recruit who overcame heart surgery and a tumor in his calf to play football at Minnesota, so when he turns up here:

University police caught Maresh, 20, drinking a bottle of Jagermeister while walking down the sidewalk of Southeast Fourth Street in Minneapolis at 12:18 Friday morning. After being stopped, he was identified as being under 21 and was found to have a blood alcohol level of 0.22.

...he may not have an alcohol problem, but instead may be operating under the mistaken assumption that he's Wolverine from the X-Men, and thus indestructible. If you've ever had fun with a breathalyzer, you'll know that 0.22 is horrendously, Lohan-ishly drunk, and a guarantee for a trip on the Stationary Tilt-a-Whirl when you lay down later that night. It's the point of being drunk where, having rocketed past Saturn and Neptune, you look back and while streaking past Pluto and into the void slur and say "Looksh like a focking planet to me, pal." It's really, really fucking drunk.

Maresh gets three points total, with one point for each citation and a bonus point for being cited while toting an open bottle of the Deer Hunter on the street.

Minnesota continues the streak with our favorite infraction of the off-season thus far: MOPED A-GO-GO.

According to Minneapolis police, two people were spotted driving mopeds the wrong way on a one-way street shortly after 1 a.m. on Sunday. An officer ordered them to stop but both people continued driving before one driver, later identified as Tinsley, fled on foot before being captured by University of Minnesota police. Tinsley, a 20-year-old junior, was booked at charged with two felonies -- fleeing police in a vehicle and on foot -- and three misdemeanors, including driving while intoxicated and reckless driving.

Um, revise the Big Ten bet, or better yet pull it off the table altogether: this marks at least the second incident where an Minnesota football player has fled police and been caught with relative ease by police. The lack of team speed may be a detriment on the field, but scoring-wise in the Fulmer Cup it's nothing but a boon since Gary Tinsley forces us to count on both hands here:

--Two felonies at three points each

--Three misdemeanors at one point each

--Bonus point for attempting to flee on a moped

--Bonus point for multiple approximately concurrent arrests with a teammate.

Tinsley's ten pointer combined with Maresh's work puts Minnesota in a dead-even tie at 15 with East Carolina. Told you it was early, Pirates fans. We await the response of the Greenville club scene and its endless dollar beer nights.

The Daily Collegian goes one more step by clarifying that Fera was found drinking straight from a bottle of Cruzan Mango Rum outside of his apartment and was said to be slurring his speech.

The citation was really for drinking Mango Rum at all, and an act of mercy since an arrest for such drinking malpractice is usually standard. Jesus, just get some Ripple next time, Anthony. It's a more honest purchase, and cheaper.

HE'LL GET ALL THE DETAILS. Very murky details, but the Big Ten's offseason speed rush continues as Illini defensive tackle Lendell Buckner is suspended for an arrest for residential burglary, a three point score for the Illini. Coach [NAME REDACTED] says threes are nice, but you gotta go for eights with the two point conversion because THEY'LL NEVER SEE IT COMING THAT WAY.

SNOWBALLS DO NOT AMUSE DELONE CARTER. That's two points for Syracuse via Delone Carter, whose car was hit by a snowball, and whose fist then hit a guy who didn't even throw the snowball. Theresults are SEXY.

FINALLY: The Fulmer Cup will award Washington three points for UW's long-ignored headstomping incident. That should clear out the Processing Station. Long live our portly namesake and his glorious competition.