If the NCAA Rules Committee is going to fucking put a goddamn rule affecting the---pardon us. We have a problem with authority, especially when it comes to things we can't possibly control. Better to let the split personalities of this website speak on their own than clutter the channel with both. In turn, gentlemen. 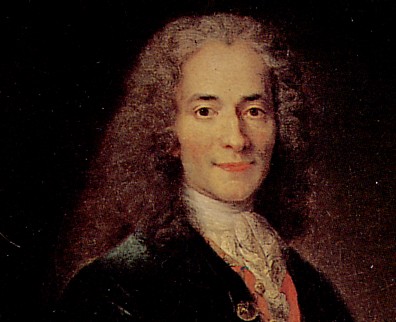 VOLTAIRE: Let the small man climb a staircase of petty rules to rule from the shoulders of giants, for this is what he must do. Let competition should be perverted by etiquette; let the sprinter pause and let the mob catch him for a moment's exuberance.

If one should take a rule that alters the outcome of a game, a thousand flowers bloom in the fields of reinvention. A punt could be too arrogantly lofty, and so better to call it back ten yards and have the gentleman kick with dignity and reserve rather than boastfully booting his team across the field in a braggart's pantaloons. A score to put a team up by a margin of thirty-five could be penalized. What better example of unsportsmanlike arrogance is there? Is that not worth penalizing, too, as it amounts to legalized taunting in cloaked form?

Let us be total in this matter. No oranges, reds, or other jarring colors on uniforms, as they are too bright and brash. Ban passes over 30 yards, since they clearly mock the cornerback lacking speed to keep up with them. Field goals over fifty yards would be reduced to two points for their insolence.

Finally, let us give the referees of college football, all long craving the opportunity to demonstrate their keen appreciation for subtle mime and dance, the opportunity to randomly interpret new rules under great duress and at high speed and alter the outcomes of games. If college foot-ball, as you colonists call it, is to be successful, one should make sure the officiating and rule of law is applied as fairly and frequently as it is in other successful sports like the NBA.

Now if you will excuse me, I must flee to Switzerland for fifteen years, as the Royal Security Forces have thrown a flag on my latest quip about the king, religion, and a metaphorical donkey. Au revoir.

FIREHORSE (after the jump) (because if we're going to channel all-caps, @ZODIAC_MF rage, we might as well give you the option of not seeing it where tender eyes could be offended by the other side of EDSBS' personality.) 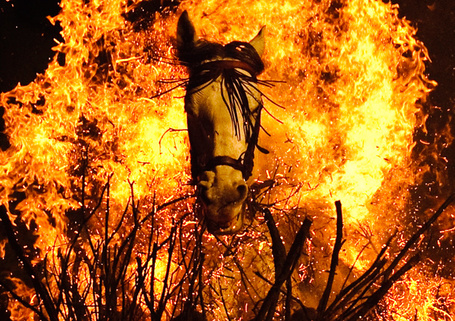 ARE YOU FUCKING KIDDING ME YOU NANNYING FUCKBAGS? FIREHORSE IS COMING TO YOUR TOWNS TO RUN THROUGH YOUR DRAPES AND SET YOUR PRECIOUS LINENS ABLAZE!!! DO YOU KNOW WHO'S COMING TO TOWN WITH ME WITH THIS STUPID BUTTFUCKING RULE? 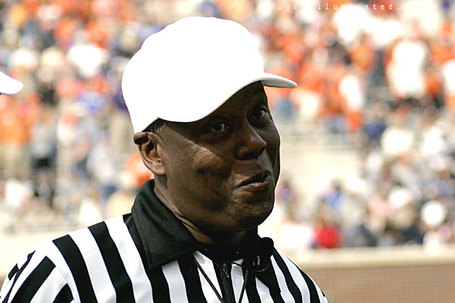 THAT'S RIGHT TWATCRACKS: RON MOTHERFUCKING CHERRY. YOU THINK YOU KNOW PAIN NOW JUST WAIT UNTIL HE GETS A HOLD OF ANOTHER RULE TO SLOW A GAME DOWN TO A MOTHERFUCKING CRAWL. IT'LL BE LIKE WATCHING TWO SLOTHS FUCK WITH THE GRAVITY SET ON HIGH AFTER THEY ATE FIVE COURSES OF ASSDESTROYING GOLDEN CORRAL FOOD INCLUDING THEIR FAMOUS RIBLETS SHIT THOSE THINGS ARE GOOD. IT'LL BE LIKE WATCHING PAINT DRY IN MIAMI IN JULY. IT WILL MAKE THE CORPSE OF BOBA FETT PASSING THROUGH THE GEOLOGICALLY SLOW DIGESTIVE SYSTEM OF THE SARLAAC  WAKE UP AND SAY "HOLY SHIT ARE THEY EVER GOING TO FINISH THIS GAME AND BY THE WAY IT SUCKED THAT I DIED IN SUCH A SHIT MANNER AFTER BEING SUCH A BADASS SECONDARY CHARACTER."

THAT'S JUST THE ACC ASSFLAKES. NO ONE GIVES A SHIT IF THEY SCREW UP A GAME. BUT WHAT FIREHORSE IS MOST CONCERNED ABOUT IS WHO'S GOING TO FUCKING DIE WHEN AN SEC GAME COMES DOWN TO THIS. YOU THINK PENN FUCKING WAGERS DIDN'T JUST TAKE OUT EIGHT MORE FUCKTONS OF LIFE INSURANCE NOW THAT THIS PASSED? WHAT ASSHOLE IS GOING TO TEACH THEM THE DIFFERENCE BETWEEN A GALLOP AND A SHITCURSED SACHAY THIS IS A CHORUS LINE MEETS FUCKING OFFICE SPACE AND I FUCKING HATE MUSICALS FUCK FUCK FUCK KICK THIS SHIT OFF A BUILDING. 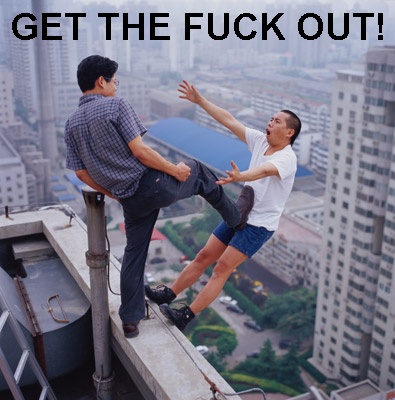 WE'RE GOING TO DECIDE GAMES BASED ON WHETHER YOU SLOWED DOWN TOO MUCH GOING TO THE GOAL LINE YEAH THIS WON'T END IN INTESTINE GARLAND DRAPING TOOMER'S CORNER OR SOMEONE GETTING SET ON FIRE IN THE PARKING LOT NICE MOVE ASSHOLE NOW WHO'S GOING TO CLEAN THAT INTESTINE UP CAUSE IT SURE AS HELL ISN'T TROOPER TAYLOR BECAUSE HE'S TOO BUSY WAVING THAT FUCKING TOWEL AND CALLING EVERYONE DAWG LIKE IT'S 2000 UP IN HERE GODDAMN I HATE THIS FUCKING RULE.

TEAMS USED TO MAKE THEIR OWN TERMS ON THE FIELD. LIKE IF MIAMI WANTED TO BE DICKBAGS FINE LET THEM BE DICKBAGS THAT JUST MEANT THAT NOTRE DAME BEATING THEM WAS WAY WORSE YOU MAKE YOUR OWN TREATIES OUT THERE LIKE RONIN NOT LIKE SOME FUCKING POP WARNER LEAGUE WHERE EVERYONE GETS PARTICIPATION MEDALS AND SOFT TAMPONS SO THEIR PUSSIES DON'T HURT. DON'T ACT LIKE DICKS AND EVERYONE PLAYS NICE AND IF YOU DO WHEN SOMEONE LIKE FIREHORSE GALLOPS UP YOUR ASS AND GOES WILLIAM TECUMSEH FUCKING SHERMAN ON YOUR INNARDS WELL NO ONE CRIES FOR YOU BECAUSE YOU LIKE LOADED UP THE DICKHEAD CREDIT CARD AND THAT'S TOO FUCKING BAD BECAUSE IT'S FORECLOSURE TIME BITCH AND I'VE GOT THE REPO CREW NOW SPREAD 'EM WITH NO VASELINE.

OH THEY'LL BE COMPETENT WITH THIS AND WE WANT TO PRESERVE THE GAME FUCK YOU FUCK YOU FUCK YOU THEY WON'T. PEOPLE ARE FUCKING INCOMPETENT AND THE LESS ON THEIR MINDS THE BETTER. THESE AREN'T FUCKING NINJAS OR JET PILOTS THESE ARE PART-TIME OFFICIALS WHO DON'T SCORE TOUCHDOWNS AND THIS ISN'T THE GODDAMN COUNTRY CLUB YOU AUGUSTA TYPES CAN GO BACK TO YOUR SHITTY GOLF JERKOFF THING THIS IS FOOTBALL NOT CROQUET AND YOUR MADRAS SHORTS MAKE YOU LOOK LIKE A PREPPY SHITHEAD WHO NEEDS TO BE HIT IN THE FUCKING FACE BY A HIGH STEPPING TIGHT END WHO SCORES DANCES AND THEN LEAPS POLE-FIRST ONTO YOUR GIRLFRIEND WOOOOO FOOTBALL.

IN SUMMARY FUCK THIS FUCKING RULE IN THE FUCKING FACE WITH A POLEAXE NAMED VENGEANCEFUCKER.