HERE'S ONE FOR YOU. Nineteen for me.

We remind you to pay your taxes reader, since we like you and because internet access is limited in jail.

HE CAN THROW HARD. Velocity has never been the issue for Cam Newton, as evidenced by the video over at Track 'em Tigers. He can throw a ball through a rhino if he has to, but the touch passes, pattern recognition, and judgment is what plagued him in his limited time at Florida. Think of him as Jamarcus Russell, but more mobile and smash-y on the run, and slightly more risky in the turnover game. He will bail out Auburn in a few games this season at the last second, but he may also be the person who dug the hole. High risk/reward, and an unfortunate yen for other people's technology: that's the short on Newton, who we wish the best. 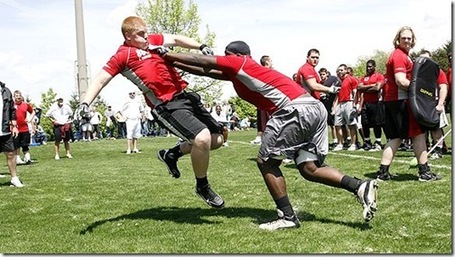 Will Campbell has so completely destroyed this unfortunate young man that it's difficult to tell whether he's pulling him off an invisible couch or pushing him into the next dimension. He's also been coming along nicely at the nose spot in Michigan's new 3-3-5, eating double teams, and generally allowing for the kind of chaos a 3-3-5 can create if the middle is plugged up nicely. Greg Robinson is on record saying the emphasis scheme is overrated, which if the Greg Robinson Rule holds true means the scheme is in fact underrated, because Greg Robinson is wrong about everything. (Growing conspiracy theory: his good defenses have only been good because canny assistants have realized this, and thus reversed every call into the field he has ever made.)

WORD TIMES A THOUSAND. God, we hope Charlie Strong is successful, but he has chosen a prime spot by succeeding Steve Kragthorpe, which is a bit like dating a woman after she's come off a relationship with a poorly hung kleptomaniacal alcoholic with short-term memory problems and an ankle monitor. But enough about your mother's boyfriend.

GRRR HE'S SO HARD. The real reason he's stripping numbers: he has already promised them to a nine year old Pop Warner wunderkind.

HEY WHYDOYA JUST GO GET A MALTED. Joe Paterno suggests kids enjoy high school a bit more instead of gearing everything to college football prep. Crazy old people and their "you're going to run out of time and die someday" nonsense! Joe Paterno attended Syracuse High and loved his science classes with Archimedes, though the whole teaching naked thing was always a bit weird.

EITHER WAY YOU'LL STILL LOSE. Oh, we don't know. Either way Georgia's going to have to play Florida, and that's gone well no matter how the offense has been. Very well, actually. <-----FIFTEEN THOUSAND CUBIC FEET OF SMUG GAS.