IT'S ALL FOR A GOOD CAUSE

Share All sharing options for: IT'S ALL FOR A GOOD CAUSE 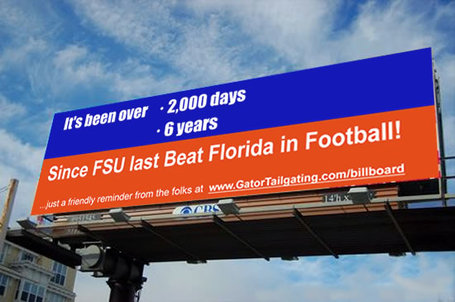 Proposed: This billboard, to be positioned on I-10 twenty miles outside Tallahassee.

Reason for existing: I dunno, like, taunting and stuff? Tauntbros seem to think "taunting" adds to the pleasure of beating someone's team, like in ancient times when invading empires left behind billboards saying things like "BURNED YOUR CAPITAL LOL" and "TOO BAD/ SO SAD/ RAN SPIKES/ THROUGH YOUR DAD/ PEANUTS AND WATERMELON AND MORE AT EXIT 8." Taunt-bros then would fist-bump as taunt-bros have through the ages, and then call passersby homosexual.

Pros: It's for charity after expenses are met. And you know, the taunt-bros.

Cons: As one commenter suggested, Auburnesque. Also: Louisiana-Monroe-ish. Taunt-bro strategy sometimes backfires, resulting in the ironic reposting of said billboard when defeat finally comes sometime in the next thirty years or so. You could just write a check to the Gainesville Pet Rescue. Genghis Khan never needed billboards and thought piles of burning bodies and smoldering ruins were better than taunt-bro billboards.

Summary Judgment: Iffy. Would be better if it said "YOUR COACH IS NAMED AFTER A TENNESSEAN CHIMPANZEE."