The Big Board is brought to you this week by Brian, whose penis is so large it was confused for an important oil pipeline and sabotaged by Nigerian militants. Only Reggie Nelson understands his pain. 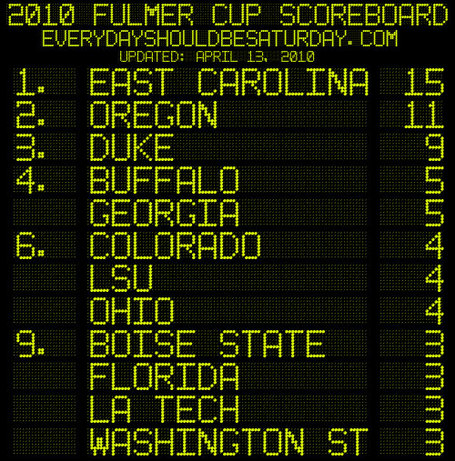 DEBUTING THIS WEEK: COLLEGE FOOTBALL'S MOST UNDERRATED PARTY TOWN, THE OTHER ATHENS. Where police horse-punching is possible, drugging of the coach at a bar has been alleged, and any and all capering must pass the "could happen in LIberty City" test, it's Athens, Ohio bringing you the quality Fulmer Cup points with Andrew Oxley's simply flawless imitation of Niko Belic getting trashed and pinballing down a crowded street.

Andrew Joseph Oxley, 21, hit a BMW 135i and a Cadillac DeVille on S. Court Street then ran up onto the curb hitting Copeland Hall on the corner of Court Street and President Street. After striking the building, Oxley continued to drive down the street hitting several other vehicles, according to an Athens Police Department report.

Did Oxley simply give up after hitting that building? No, sir. He pressed ahead, boldly taking out two cars on the way down the street before his arrest for DWI, finishing the drill not just by hitting cars, but a BMW and a Cadillac.

This, ladies and gentlemen, is finishing the drill. The full grande DWI is three points, but since Oxley actually hit a GODDAMN BUILDING and then proceeded to destroy two cars in the process, the rampage effect demands a bonus point, as well. Four points for Ohio's debut in the 2010 Fulmer Cup, and stay gully, Athens.

ECU POURS IT ON.  We had to check the date for freshness since it seemed like a repeat, but nope: that's two more ECU players getting arrested for being piss-drunk in them streets, and this time literally so. Rahkeem Morgan gets your ho-hum underage possession charge for one point, but Matt Thompson takes the term quite literally by getting a public urination charge along with it. Two more points for ECU thanks to Greenville's irresistible nightlife.

ECU may win this with a pile of junk-bond charges, but it's quite a lead at this point. Vegas ups their chances of a championship significantly to cut down on the damaging margin bettors have at this point.

UCONN: A Power Bar, a Husky caught stealing, and one measly point for UConn. Next time, go for the jerky or nuts right by the door. Unprocessed, healthy, and makes for an easier escape.

HE'S GOT WARRANTS. OU's Donald Wayne Stephenson picks up a point for outstanding warrants, but really it was because his middle name is "Wayne," which is in fact a perfectly legal grounds for arresting someone, since all people with the middle name "Wayne" are serial killers waiting to happen.

Thus are allocated this week's Fulmer Cup points. Go in piece, children, and behave as well as you can.