There were a slew of spring games this weekend, so we go conference-themed crazy-ass wacky with them because there are things and you need to know them.

HIT IT.  Spring games broke out all over this fine gun-toting continent of ours this weekend. All of them are referenced in one way or another below. We begin with Football Sparta and our flaky gridiron Leonidas below. (Photo via Tricia Coyne of Gatorsports.com, whose entire slide show is beauty incarnate.) 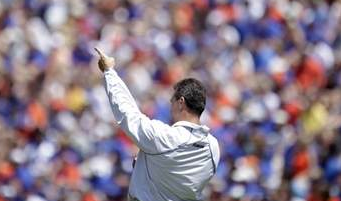 IT IS 2006 ALL OVER AGAIN: WE HAVE TWO QUARTERBACKS, AND HIPS ARE NOT ALLOWED TO LIE AS WE BRING SEXYBACK BACK. John Brantley passed for 201 yards, two TDs, and no INTs in Florida's Orange and Blue Game. Having nearly the entire Florida starting secondary out thanks to established starters getting their customary pass on playing may have helped, but LA LA LA NEW SHINY THING. Footage and bland interview with John Brantley here.

Brantley, Trey Burton, and TE Jordan Reed will likely work in some variation of 2006's Florida attack, with Brantley playing the part of Chris Leak, Burton and Reed equalling one Tebow for short yardage and single-wing scenarios. The short-yardage gap will also be filled by EDSBS object of crushiness Mike Gillislee, who continues to run like the angry bastard you want when you need three feet of precious yardage for football purposes. More analysis to follow, but in the meantime Alligator Army seconds the Viva Brantley! reviews and reminds you that no one got hurt, Ben Volin has 24 items of interest, and who wants shaky fancam footage of Brantley's first drive of course you do.

(The first play was called by a fan who won a contest allowing two fans to call the first plays for both the Orange and Blue teams. Brantley's play went for a bomb and huge gain to Deonte Thompson; Trey Burton's went for an INT.)

Zach Mettenberger, suspended for the first game of the season for drankin'-related charges, had the best statistical performance of the day in Georgia's usual five-play playbook scrimmage known as G-Day, and will be the starter because UGA fans will pluck out their eyes with their bare hands if forced to watch another season of floppy-armed quarterbacking. The Dawgs also debuted their new 3-4 by not debuting it at all, and showing virtually none of the new defensive playbook. Sooooo crafty.

VANDY HAD NO SPECIAL CODES OR OFFERS. And only scored one TD in the entire spring game.

CLEMPSUN STATUS QUO: Defensively solid, suspect on the offensive line, running backs with ability, an iffy quarterbacks situation thanks to Kyle Parker's possible departure to major league baseball, and yeah, it's a standard Clemson team: a few mules short of a wagon train.

NOW SERVING HAM BECAUSE HE WENT IT: MICHAEL MCADOO. The Tarheels' junior defensive end went totally ham in UNC's spring scrimmage, tallying four sacks and picking up an interception in UNC's spring game. UNC should be heinous next year on defense, and the usual valise full of crap on offense.

STILL SHAKING OFF LINGERING GROH-MENTUM. UVA's spring game--er, "controlled scrimmage"--looked like basically every UVA football exercise you care to remember from the past five years: atrocious offense and mostly good defense, mostly due to the lingering effects of Al Groh-ness. Mike London did explain periodic cloudy conditions in the Charlottesville area, though. It's the fault of Morgan Moses, 2010 UVA signee.

"He [Morgan Moses] blocks out the sun when he walks outside and everything."

Give him cookies, and he will bring it back.

COLORADO UNDERSTANDS ENTERTAINMENT, AT LEAST.  So they lose games to Toledo: at least they don't pull the "five plays and zero entertainment value" thing Georgia and UVA do, and make things semi-interesting for their fans.  Credit Dan Hawkins for that, at least.

AS FOR BAYLOR: getting closer to a a "football-like substance" every day with a spring game more "game-like" than every before! Robert Griffin could have played, but they're taking the Ferrari easy since it just got out of the shop.

YOUR POLYNESIAN BADASS FOR 2010: Taimi Tutogi, a sophomore fullback/ H-back/ whatever who is thumping away in the void left by the departure of Rob Gronkowski. How esteemed is his ferocity? He

has received the go-ahead from the tribal elders to release the Power Hair. 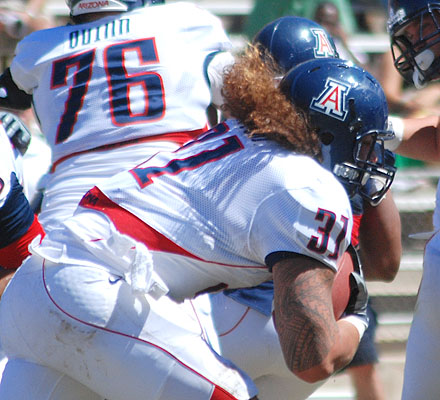 THIS LINK DOESN'T EVEN BELONG HERE. Since BYU didn't even really have a proper spring game.

THE MOST VICIOUS TEAM ON EARTH AND CONSENSUS NATIONAL TITLE FAVORITE. The Miami Redhawks have to play them in week one as part of Florida's attempt to build THE MOST FEARSOME SCHEDULE EVER. They're improved, blah blah blah.

SOUTHERN MISS. Points a-plenty in their spring game, and every time DeAndre Brown plays without injuring his leg in a grisly fashion is a time when you should smile and thank Crazy Old Testament God for not doing that to a person twice.

THERE IS A STYLE ELEMENT. Louisiana Tech's scrimmage featured points awarded for "explosive plays," which we'd allow in regular season games if the Rules Committee would strike the unsportsmanlike conduct rule from the playbook. It would be just as arbitrary, and twice as entertaining/infuriating.

IF VEGAS WILL TAKE THE BET MAKE IT. MTSU's White team has a 5-0 win streak in Rick Stockstill's tenure. WHEN WILL HIS UNFAIR HATRED OF THE BLUE TEAM CEASE?