WE FAIL TO SEE HOW THIS IS ANYTHING BUT MAJESTIC

Share All sharing options for: WE FAIL TO SEE HOW THIS IS ANYTHING BUT MAJESTIC 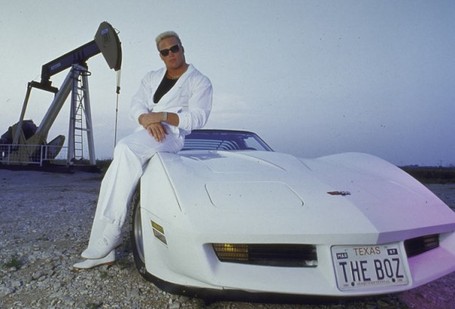 How anyone could see anything but excellence permeating every pixel of this photo could only be the product of a disgruntled Seahawks fan venting over Bosworth's roid-deflation and subsequent lackluster NFL career.

White Suit: Because a serious gentleman wears a suit, and a white suit belongs only to a gentleman so assured of himself and his surroundings that he will neither sit on something and befilthify his pristine suit nor lose control of his bladder or bilge valve whilst esconced in its ivory embrace.

White Shoes: Don't even check the calendar, because if it's Boz-time it's summer wherever you are.

Black T-shirt: He's a man who sees things in two shades: white, and that color it makes when the lights are off and you're naked with him in his 40 foot wide waterbed. He doesn't recall the word, but he majored in Asskick, not English baby.

Sunglasses: The shine and heat from his balls is a gift and a curse. Wear appropriate eyegear around 1980s Boz at all times.

Oil Drill. Not to get all poetry technical on you, but there's some symbolism going on there, which he won't explain. It's seriously complicated, and way too advanced to lay on you right now. Mindblowing stuff, but it would take some major lecture professor talk to get you to where Boz is okay it's supposed to be his dick.

White Corvette: There's supposed to be a model on the front at all times. When shit gets too real and the Boz starts cutting corners at 80 miles an hour, a new one is placed there by helicopter delivery to replace the old one who fell off screaming and rolling on the roadside. There's only two seats in this thing, baby: one for the Boz, and one that stays empty because you just look SO FUNNY SCREAMING ON THE HOOD THERE! Plus he can balance some ketchup on the seat for easy dipping, and he can't do that when you're sitting in the seat talking with your lungs and mouth like a woman.