POSITIONS THAT NEVER CHANGE: BY POSITION, BY SCHOOL

Share All sharing options for: POSITIONS THAT NEVER CHANGE: BY POSITION, BY SCHOOL

Some friends enjoy dating the same person over and over again. Take that friend of yours who only dates Asian girls. Come on, Fen Huang, branch out, man! Viva la variety! Or that friend of yours who's never even dated a guy. Frank, once you get past a few of the logistical issues, men can be loving, caring partners like anyone else. Our friend Linda keeps dating the same type: hairy, really masculine, lives pantsless in the woods, and doesn't like to be photographed. She says antisocial, we say Yeti, but disagreement shouldn't come between friends.

Anyway, people like the same thing over and over again, and football programs follow suit. They often do this by position. Auburn, for instance, has been placing the same generic, rag-armed white quarterback on their roster for over two decades now. Sometimes he's referred to as Patrick Nix, sometimes he's Chris Todd, sometimes he's Brandon Cox, but inevitably he sits no lower than second on the depth chart and is convinced he can scramble with 4.4 speed despite possessing 5.4 wheels.*

A list of the following schools and the universal form presented in various avatars throughout history.

OHIO STATE: BRENT MUSBURGER'S FAVORITE WHITE LINEBACKER. A "gritty" player, usually given an equally gritty name. Will be the object of Brent Musburger's affections for the duration until he assumes another name, changes his hairstyle slightly, and enrolls to replace himself at Ohio State and be slobbered over under an entirely different name. Beloved by slow white children, old columnists, and racists. Spottily desired by pro scouts. Was born with an old-school foam neck roll that always grows back no matter how many times it is surgically removed.

AUBURN: THE SOMEWHAT EPT WHITE QUARTERBACK.  The inspiration for every walk-on who ever believed they, too, could strap on a helmet, lace up some cleats, and play a few downs of college football, the recycled Somewhat Ept White Quarterback does best what Auburn fans want him to do anyway: hand the ball off to a running back. Wobbly-armed and prone to hopeless scrambles on par with that of wounded springboks evading lionesses on the hunt, they are best found in the wild by following the collective gasping noise the crowd makes when a play-action pass is called for them to hurl into opposing hands. Somehow wins seven or eight games a year before limping into a career in insurance or banking without so much as a glance at the NFL. 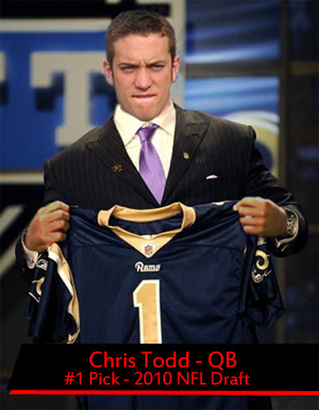 He's the bro you want leading your team into battle...in frat-league flag football. Anywhere else and he's a liability.

WISCONSIN: THE FAT AFRICAN-AMERICAN RUNNING BACK. Wisconsin might sprinkle in a change-up like Michael Bennett every now and then, but when the chips are down fat boy trots out in red and begins leaning behind all that converted cheese and beef stick on the o-line for first downs. Ron Dayne is the prototype, but since then Wisconsin has been on a Vertigo-esque quest to find his replacement. "Here, P.J. Just put on this Ron Dayne wig. If you love me you'll wear it. WEAR THE WIG, P.J.! EAT THIS STICKY BUN AND WEAR THE WIG!!!"

SOUTH CAROLINA: ONE HOPELESSLY OVERMATCHED AND TALENTED DEFENDER. When everything's on fire, South Carolina always has at least one firefighter who will hold the hose to the bitter end, a soldier who will tie himself to the tree, load up a stack of assault rifles next to him, and keep firing until they have to call in artillery to put his ass out of commission. Oh, he's doomed: make no mistake about it, since the offense will fumble away the ball at the one, or let David Pollack face-rape your hopes of victory, or just get down by forty to Florida before you can get to the half, but that one guy? He's going to be hitting people so hard they prolapse, because fuck you and the scoreboard, that's why. When the smoke clears, your men will not search his pockets for valuables out of respect for his valor no matter how many pieces he may be in after the battle.

Leave your own below, since this phenomenon is not unusual or limited to these cases.