You go on paternity leave, and there's Stephen Fry as your patron saint of living spicily. We need to butch this shit up quickly, throw some testosterone grenades around, and get that lavender scent out of--

DId Holly drape an ornamental scarf over the sofa? JESUS, WHERE'S THE GODDAMN BEAR RUG- We need an antidote, something to counter the impressive but still decidedly unburly Fry-ness leaking all over the place. Did he leave an iPod? He left eight iPods? And an unpublished 829 page memoir about the three weeks he spent as a young hustler in Brighton?

Only one thing can yang out this built-up yin-pile we've got here, and that's a triple latte of Scandivian testostespresso administered directly to the eyeball. 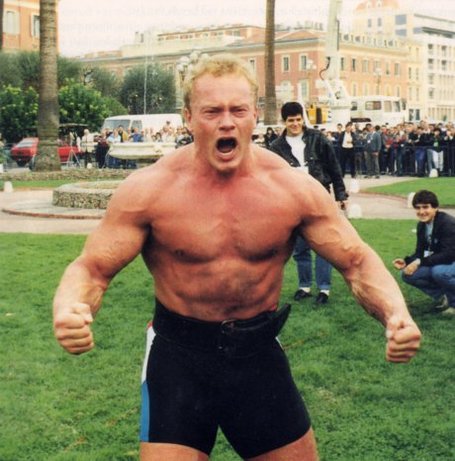 I'm pretty sure that's just Jon Pall Sigmarsson yawning, since his pants flew off and women applauded until they passed out when he got really mad and flexed his drawers off with rage. The Icelandic powerlifter and four-time World's Strongest Man winner, Jon Pall Sigmarsson was the original bulgy-veined face of the WSM competition in its late night ESPN glory, a blonde-mulleted and exuberant hunk of herring-devouring manbeast prone to yelling at other competitors mid-lift while competing shirtless and wearing a kilt. Sometimes he wore child molester glasses, but powerlifters and strong men are by definition exempted from punishment or arrest at the hands of the fashion police.

Sigmarsson possessed Atlas strength, sure. He could deadlift 815 pounds, and do just a bit less one-handed just for giggles. could squat over 800 pounds, and benched over 500 pounds. Those are numbers. They're chilly, impersonal, and not as awesome as the cars he rolled like beach balls, the long line of men who thanked him for the privilege of getting schooled in arm wrestling, and the wagon wheel deadlifts he fired up with a spooky ease.

--"One is not alive if one cannot deadlift!"

-"Kazmaier is angry because I taught him a lesson last year, and he is calling me a paper champion, but I will make him eat his paper now."

Ironically, Sigmarsson was deadlifting in his gym at the age of 32 when his aorta ripped, thus sending him to Valhalla where he spends his time wenching, deadlifting large mountain ranges, and waggling his trophies at Bill Kazmaier. 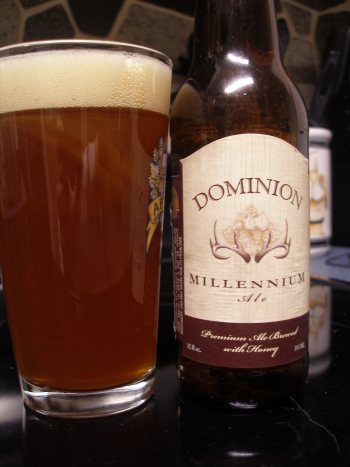 The brewery's website is currently devoid of anything pertaining to their product, but from the bottle we divined this stuff is apparently "brewed with honey and spices" and is definitely 10.5% alcohol in a little bitty bottle. And we say "definitely" because two of these puppies caused one member of the EDSBS staff to put another in a chokehold and sing "Tiny Dancer" in perfect falsetto, in a crowded restaurant, on a Tuesday. Apply with caution.

Orson: YERBA FUCKIN' MATE. This will be the only time in the history of the Digital Viking something gets recommended on a basis of only having it once, but there is good reason for it. Yerba Mate is the reason meth isn't very popular in Argentina, because it would be redundant when you have zonked Argentines wandering around sipping liquid crack-juice from gourds with silver straws. That's how fucked up Yerba Mate is: you have to drink it from a gourd, which is really just one step away from "Oh, here's our national drink, you have to sip it from a boot while riding this goat and renouncing Satan." One particularly stiff cup of it from an Atlanta cafe one night had our apartment immaculate, a double order of pancakes made with smoothie sides for breakfast, the bills paid and files reorganized, and us wondering whether an eight mile run to start off a Wednesday would be a good idea.

It's made from the powdered bones of fleet ostriches and pure kerosene dust. If you're doing something that requires you to be awake for one to eleven days, try some and you'll be fine. Oh, I hear you cosmopolites: it's not that bad, I've had worse, [comment that lets you know just how well-traveled and jaded I am.] FUCK YOU. It's cocaine in a cup and when we drink it we're ready for murder, distance running, or both at the same time.

Never again for us, but for you, a warning and a recommendation at the same time that if it absolutely had to be there yesterday, you can drink some, run around the earth and turn back time, and then get your assignment in early with time to scrub the baseboards with your tongue.

Orson: Triscuits. Step back, Cheez-Its. Goldfish, your lack of commitment to a proper geometric shape frightens and concerns me. Ritz, you represent a hopeless conglomeration of industrial solvents, butter, and a few bread crumbs in a fearful, waxy unit fit for farm fodder only. Saltines, you can't be blamed for your blandness. You came into the world this way and bear no responsibility.

In the great cracker debate of 2010 there are two winners. In the individual category, the greatest cracker of all time 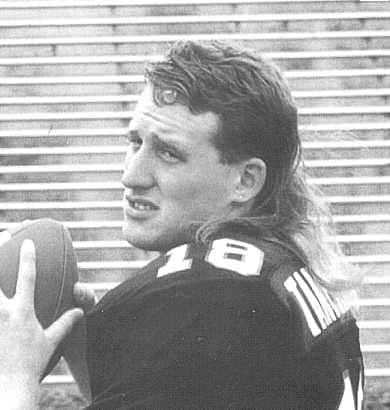 Warning: do not attempt to mate with screen. 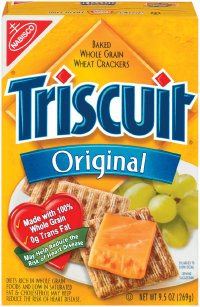 They shouldn't be as good as they are but for the great trick of American snack-making executed to the fullest: maximizing the amount of fat and salt per square inch to create the perfect non-nutritive snack-shingle consumed mindlessly by the pound whilst watching the television programming of your choice. Everything about Triscuits--every goddamn thing--is perfect, brilliant, and infallible. To wit:

The name. The only cracker whose name could conceivably also be a linebacker for LSU. Triscuit Williams on the tackle: it sounds more right than you'll ever admit.

The crackle. Triscuits snap two ways: once with the grain of wheat fibers, and once against it. It has two kinds of snap. You know the only other thing that breaks with such awe-inspiring power? AN EARTHQUAKE. The P and S-waves of the cracker universe even awes geologists.

Shit you can eat on them. I like cloaking them in meat. Some part of the brain is inevitably foiled, like "Oh here comes this square piece of Black Forest Ham, and HOLY SHIT THERE'S A TRISCUIT IN THERE LOTTERY DAY AND DADDY'S BUYING THE CADILLACS FOR EVERYONE!!!!" Fooling yourself is happiness, and Triscuits are all too happy to help you in the giddy charade.

Don't even talk about Wheat Thins up in here. Wheat Thins are the babies Triscuits throw into the wilderness to be consumed by the snack-wolves, things too weak to live in Cracker Sparta. WHAT?

/mean mugs at your Chikn-In-A-Biscuit ass

Holly:  Not a snack for you and me, per se, but check it out: a 67-million-year-old snake fossil frozen in the act of eating a baby dinosaur! 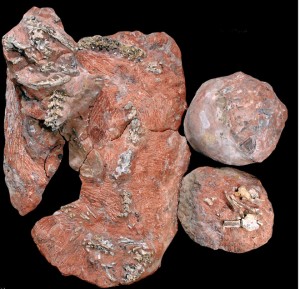 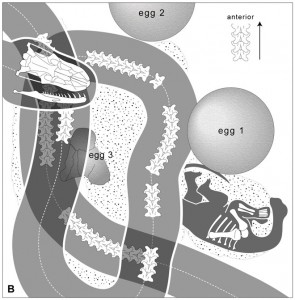 This is your weekly reminder that snakes are assholes.

Holly:  The 1947 Texas City Splosion. Man, Galveston Bay just can't catch a break. Choice excerpts from the story follow; see if you can tell where things started to go wrong:

Just before 8:00 A.M., longshoremen removed the hatch covers on Hold 4 of the French Liberty ship Grandcamp as they prepared to load the remainder of a consignment of ammonium nitrate fertilizer. Some 2,300 tons were already onboard

While Leonard Boswell, the gang foreman, and Peter Suderman, superintendent of stevedores, discussed what action to take, the master, or captain, of the Grandcamp appeared and stated in intelligible English that he did not want to put out the fire with water because it would ruin the cargo. Instead, he elected to suppress the flames by having the hatches battened and covered with tarpaulins, the ventilators closed, and the steam system turned on.

At this point, growing pressure from the compressed steam fed into Hold 4 blew off the hatch covers, and a thick column of orange smoke billowed into the morning sky. Attracted by its unusual color and the sirens, several hundred onlookers began gathering a few hundred feet away at the head of the ship. 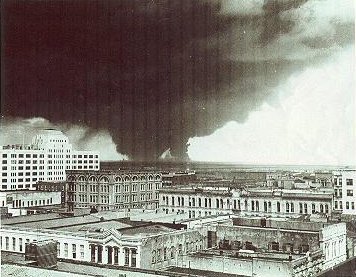 Oh, but there's more. Do read on for details of the actual explody bit, which rattled windows of buildings 15 miles away.

Orson: The righteous gun and all-American spirit of our new national gatekeeper, Chimpandeagle. 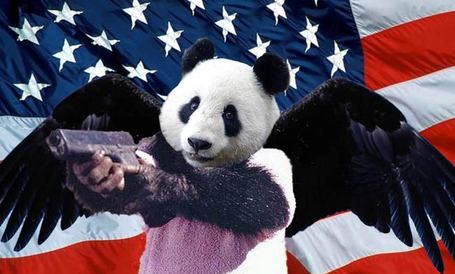 DHS is now obsolete. Post thirty on every directional border of the US and sleep well deep into the red, white, and blue night forever, America. (HT: Ufford.)

TRANSIT.
Orson: Sketchy Laotian Speedboat!
A longtail boat with a hilariously outsized motor smuggled over from Thailand and strapped to the back, Laos has formally banned the use of these since 2007, meaning everyone still uses them and pays bribes along the way because law= *wanking motion*. Seventy miles per hour wearing a helmet (they have a sense of humor) on a river with rapidly shifting sandbars and huge logs in a third world environment with little available medical care may not sound like a good idea, and it isn't, but giving the finger to your insurers while doing it is well worth the risk.

Holly: The Airbus Super Transporter, a/k/a the "Beluga": the plane that eats other planes. 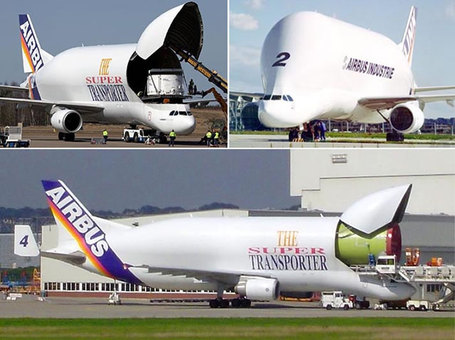 The Beluga started out as a standard A300 cargo jet before someone at Airbus apparently stuck a bike pump in and inflated it until it was big enough to swallow pieces of Airbus's other planes, or Doug's Lego collection, or Terrence Cody. It now flies wing sections from the A380, and/or entire fuselage segments of the A320 and A340, between Airbus's various assembly facilities; it also flew Eugène Delacroix's painting Liberty Leading the People (whose canvas is too big to fit inside a 747) to an exhibition in Japan in 1999. Yes, seriously, it flies. If you have something that's too big to fit inside the Beluga, you don't need to be hauling that shit around.

Holly:  Archer. It's early, but it's safe to say what we feel for this show is true love. ("We" here used in the plural, not royal sense; there's a hundred percent consensus in the EDSBS writers' compound that Archer embodies the spirit of existing spicily more than any other pop cultural output in our tender lifetimes.) Observe:

Quoth our friends at Warming Glow:

Allow me to take a step back for the bigger picture here. When writing about various TV series, I try to allow for the fact that people have widely varying tastes in comedy. Some people think Kristen Wiig is the best part about "Saturday Night Live;" others think she’s the worst. As much as I detest Jay Leno, I recognize and understand his appeal to boring people.

Orson: Bioshock. A video game can be here, especially when just the scenery scares the shit out of you. 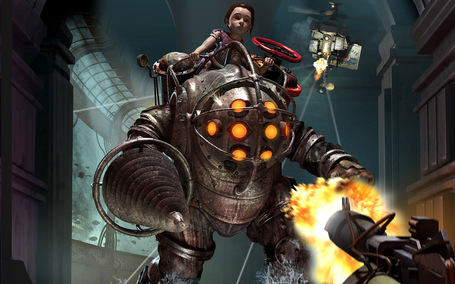 I don't even care about the hackier elements of the game: the fake moral diverts where you have to decide to club the little "girls" or not, the zombie-killing dynamic dominating a lot of the game, the tiresome little puzzles built into the acquisition of better and bigger stuff for you to blow away/fry said zombies. Someone really, really went gonzo on the art direction, because what you get to stumble around is an underwater city frozen in the 1930s built by Objectivists and built by Art Deco architects, a waterlogged dystopia so perfectly and ruinously rendered you sometimes miss the mutant zombie coming at you thanks to gawking at the creepy, soaring vaulted ceiling you just noticed on the third time through a level.  If you can't play a game at night for fear of it creeping into your dreams it must be good, unless you get nightmares from middle-schoolers incinerating you with Predator missiles in Modern Warfare 2, and in that case you need to unplug and consider your priorities before continuing play.