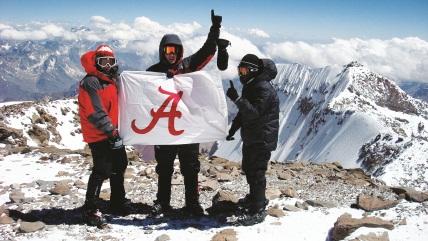 This Alabama grad is trying to climb the seven summits, but yes: it was all an excuse to get to that cheap joke. Note: he does climb mountains rather quickly, thus keeping up the reputation of ESS-EE-SEE SPEED baby.

MINGOVIANS, WE BRING YOU GOOD TIDINGS. Barkevious Mingo, Lord of the Zeppelin Republic of Mingovia, has been mentioned yet again in the stories this week about the reshuffling of the LSU depth chart. Rejoice! We stand yet one day closer to a glorious Mingovian dawn on the defensive line. Included in that story is the move of Russell Shephard to wideout, something which will please the faction of Tiger fans who want to put Shephard in the shotgun and watch shit blow up. Correction: strike "please," and insert "it will make you want to firebomb Gary Crowton's car."

THAT'S ALCOHOLISM. Ike Whittaker will work out at Virginia Tech's pro day, which is a huge accomplishment for the former Hokie qb considering he spent last fall stealing food to survive on the streets of Blacksburg while drinking alcohol he toted around in plastic bags. Kicked off the team and living on next to nothing, Whittaker remembers little before five months ago when, considering suicide, he walked into football ops guy John Ballein's office and decided to say goodbye to him.

Whittaker has been sober for five months now after rehab. Making a pro day is the accomplishment for him; anything after that and sobriety is gravy. (HT: CGB)  In that same link are Virginia Tech's lifting results from spring practice thus far. They will make you feel small and weak.

CONFUSION IS LEARNING. Georgia started out the move to a 3-4 with a bit of confusion, but P90X taught us all that confusion is how you build muscle, y'all.  (That and sitting in your living room doing pushups and pullups for an hour a day. That works, too.

LYLE MOEVAO AND HIS OUTSTANDING TATTOOS, AU REVOIR. Oregon State qb Lyle Moevao was denied a another year of eligibility, which was a longshot to begin with but given the consistency of the NCAA's actions on anything, why not throw your money on red and see what happens?