Remember the bit in 300 where the freaky transsexual Persians really decide to get serious, and begin emptying the bin full of freaks they've collected from the distant corners of their empire onto the outnumbered Spartans? That bin is known in college football as the Mississippi junior college system, and in it is contained enough raw talent to field the 1986 Bears' defense with the 1999 Rams' offense, and do it at the college level.

Unfortunately, few of them can qualify, and generations of football talent has gone towards JuCo championships and little else. (SAD SOCIETAL PROBLEMS FACE GOES HERE LOL.)

One exception to that rule was Alabama defensive tackle and important geological formation Terrence Cody. Another is his 2010 doppelganger, James Carmon, a 6'7" 350 lb Juco transfer to Mississippi State, where he is said to be unblockable in drills. Here is a picture of him. That coach died shortly afterwards of natural causes, because being pulled in half comes quite naturally for those who refuse gravy to large men. 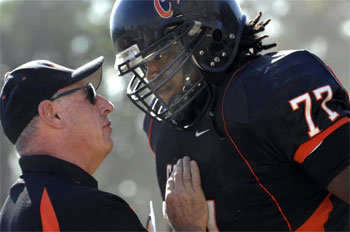 I WANT GRAVY YOU GIVE GRAVY NOW

Carmon's issue in spring has been his conditioning, since catching beasts of the field with his bare hands has been too easy. (At his size, passing deer and boar mistake him for a large boulder, and then fall into his clutches.) Carmon also has to learn to "play under his pads" since his size has previously allowed him to swat blockers out of the way like a polar bear slapping baby seals out of a breathing hole. Fear him. Stock your cabinets for him. Love him.