The media assembles to hear LSU coach Les Miles' remarks after the third day of the Tigers' spring practice. 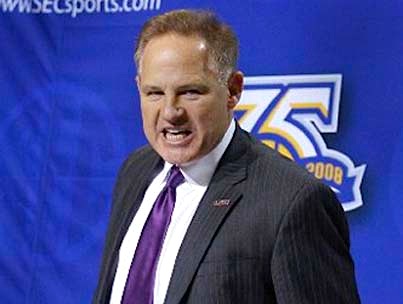 Les Miles: Good afternoon, gentlemen. I think you know how this goes.

Reporter 1: Coach, when you look at--

Miles glares at an empty bucket in front of the podium.

The press corps scuttles to put sticks of salt-water taffy in the bucket.

Reporter 2: Tell us what you think of Jordan Jefferson's continuing development as a quarterback.

Reporter 2: But, he's currently your starting--

Miles: Don't tell me about my team. I don't tell you about raising purebred cats to photograph in calendars you sell to old ladies, do I?

Miles: Exactly. I don't know anything about them, and you're out there selling them to children. CHILDREN, I TELL YOU. You're lucky i let you live, much less ask me questions. Next.

Reporter 3: What's going to help this young offensive line come together as a unit, coach?

Miles: Anyone watch Lost? Reminds me of..

Miles: Never heard of it.

Miles: No, I don't watch adult films, and don't appreciate you bringing them up here.

Miles: No, this was a comedy.

Miles: They're art, and I'll hear no differently. I didn't appreciate the question in the first place.

Reporter 3: But we didn't ask a question. You did. 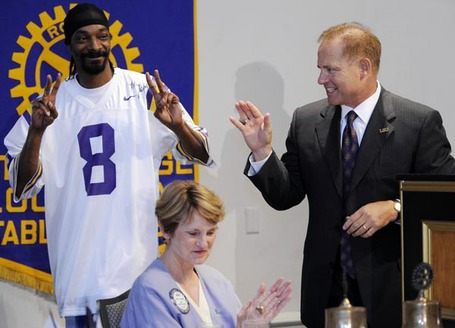 Miles: You! Kleinpeter! Ask me a question.

Reporter 1: Um, what about the move of Jai Eugene to safety?

Miles: Well, with the tragic death of Chad Jones, we had to--

Reporter 1: Coach, unless you have some news we don't, Jones is in Indianapolis right now.

Miles: Well, isn't that like death but worse? You people don't appreciate figurative language at all.

Reporter 3: He's at the combine.

Miles: Farming, then. A noble profession.

Miles: Jesus, it's the farmers. They've finally decided to go to war, haven't they?

Reporter 1: Coach, I'm not quite sure what you're getting at.

Miles: I knew there was a time when the farmers of this nation would tire of our dependence on technology and hunting, and come after us all with their sharp, unstoppable instruments of death. Gentlemen, I suggest you stand with me, the hunters, and the nerds in fighting the farmers and their natural allies: cycling enthusiasts and homosexuals. That is not redundant. I'm just disappointed to hear Chad is involved with them.

Reporter 2: He's trying out for the pros, coach. The National Football League. At their combine.

Miles: Well, now, that is confusing isn't it? You can't blame me. Not my fault they use farm equipment to test new players. If I had my choice, though, it wouldn't be a combine.

Miles: I'd have 'em push around a pig on a skateboard, because that's a real test of coordination, there.

Reporter 1: Coach, I'd just like to ask one other football question.

Miles: I'd like to do that, but you'll have to sweeten the deal, if you know what I mean.

Miles: I saw that. Some bastard slipped a peppermint in there. That's solid. It's not even close to a pliant piece of spun sugar. You'll all live to regret that.

Coach Miles interrupts the press conference to microwave a frozen burrito. The package clearly says two minutes. He puts it in for 7 seconds, takes. it, and bites hard into it. He chips a tooth.

Reporter 3: Coach, an editorial today suggested eight wins was realistic thinking for Tiger fans going into this season. What do you say to that kind of thinking?

Miles: I don't like it. We've got a damn strong football team. I don't think we should expect to win a specific number of games, though. We might win eight. We might win twelve. We might win sixteen.

Reporter 2: There are only twelve games in the regular season.

Miles: There's nothing regular about my football team or the season we play, son. If you'll excuse me, I have to go arm myself for the upcoming war against the farmers.

Miles pulls out a gun and cocks it before tucking it into his waistband.

Reporter 3: I think we cleared that up, coach--

Miles: They get up early, so there's not much time.

Miles looks side to side, and then runs up the aisle and out of the building into the sunlight brandishing his gun. No one on the campus seems to notice, because this is Louisiana, and no one gets serious until the second shot is fired.