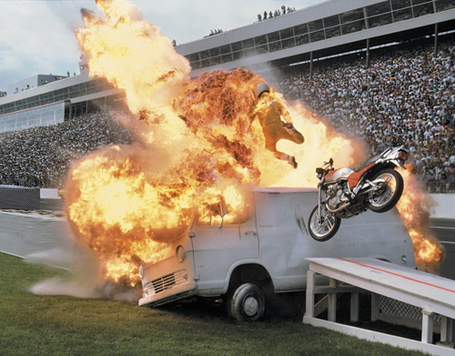 This picture has nothing to do with this post, but if your Monday didn't end like this, you DID IT WRONG.

Oregon made the big points, but East Carolina continues to keep pace in the Fulmer Cup with a good streak of general loutishness. In fact, if both Giavanni Ruffin and Brandon Jackson were charged with public intoxication, resisting a public officer and obstructing, then a point each equals six points for ECU, who at a current score of seven would take the Fulmer Cup lead with 13 points.

We'll finalize a weekly update and the big board tomorrow, but if so it illustrates a few things of football interest. It shows that a team, even when hit with the big play, can still come back and grind themselves into back into the game against an opponent with a lead. It shows that Greenville might be more lively a town than you might think. Finally, it shows an instance of the rare "Reverse Holtz" effect: when Lou came to a place, people started getting arrested, while Skip's departure rips the lid off a simmering cauldron of minor drunkenness.

Minnesota also picked up a DWI charge for starting safety Kyle Theret, which is a fourth-degree charge of DWI, and may not even be a felony. Full scoring tomorrow. Now if you'll excuse us.