We tried to find so many other ways to break this down, including one finalist "dumbass/genius," which didn't work the minute you considered Jamarcus Russell and Rex Grossman's college stats, and since both spent their final semesters engaged in one variety of futile task or another. (Rex: seeking the perfect whippit; Jamarcus, attempting to untangle sheets, giving up, napping for three months.)

Another was "sexy/unsexy," which turned out to be a kind of conflagration of a qb's overall risk-friendliness matched with their unquantifiable lustiness in general. This turned out to be far, far too slippery, as what floated the boat of Ohio State fans (GRRR HANDOFFS BABY) differed greatly from what a USC fan might consider sexy (POST ROUTE BOMB LEINART PREGNANCY MAGIC.)

Ultimately we arrived at this: Quarterbacks exist in two dimensions. First, they're one degree or another of physically gifted. Second, they're either risk-averse or not. This last one's slippery, as you'll see, but for parsimony's sake roll with us to the graph below. 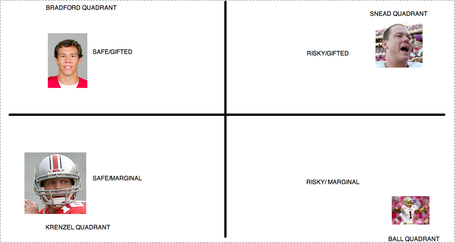 Counter-clockwise, starting in the upper left:

TRAITS: Not only being physically gifted, but squeaky clean in the ops department, your Safe/Gifted prototype knows he could turn a DB's hands into a fine red mist with his arm strength in an attempt to force a pass into coverage, but instead checks down to a safer play when circumstances demand it. Bradford's 2008 season was the pinnacle of skill meets safety: 50 TDs to just 8 INTs with only 11 sacks. He had a wealth of tools to work with, sure, but all the talent in the world won't matter without football IQ to manage it. (See: Risky/Gifted, aka "the Snead Quadrant" or "Jeff George Memorial Bracket.*")

(Clausen belongs in there, too: 28 TDs, 4 INTs in his senior year. 24 sacks to go with that, too, but he was throwing bullets off his back foot with a ruptured spleen and a shiv sticking from a punctured lung. Douchebag, yes; talented and aware, yes and yes.)

OTHERS: Jay Barker, anyone who has the phrase "He just wins football games" said about them, Buck Belue.

TRAITS: Slow? Has a major you wouldn't normally assume was possible with a football scholarship? Doesn't actually have a football scholarship? Unrecognizable in a throwing motion, but unmistakable in a handoff pose? The Safe/Marginal prototype is the guy out there to not screw things up, hand off, and maybe--MAYBE--make three plays a game that matter passing. Okay, maybe two.  Will later own an insurance business, but not a car dealership, because those are for big ballers only who can throw plastic footballs at big openings without children laughing at their arm strength and throwing motions. 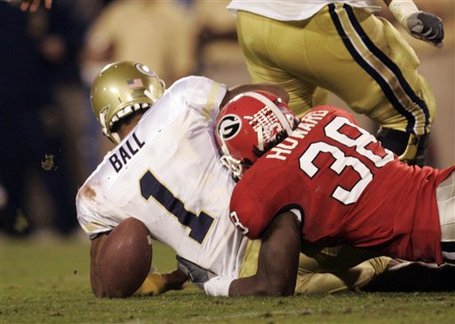 TRAITS: Oh, the sad apex of when high school talent flatlines. They got further along than you did: after all, they did get a scholly, or at least walked on and are probably better athletes than you ever dreamed of being. Except for Noah Brindise. You're probably as talented as Noah Brandise is in something athletic.

THAT'S NOT THE POINT. The point is: the risky/marginal combo refuses to acknowledge either the limits on their own talent or that of their teammates, and puts their team into dangerous situations over and over again. This is sometimes not their fault due to zero pass protection, poor route running, or a general lack of competence teamwise. No quarterback exists in a vacuum, true, but the marginal risky vacuum takes said vacuum, fills it with killer bears in spacesuits, and then invites them to attack while insulting their mothers.

TRAITS: Sleeping with your girlfriend, but leaving traces all over your apartment most likely, and not intentionally. Risky/Gifted qbs have the tools and will remain convinced of it to the day they die, which is why they usually expire after accidentally throwing a lit cigarette not into the yard, but into the gas tank of their parked car on accident. ("I thought the lawn was open.")  Jevan Snead is the pinnacle of this phenomenon: good judgment on one throw, and absolutely blindsidingly awful on the next. But it always looks pretty, and that's what counts.

Fun part! IN LIFE YOU ARE ONE OF THESE. We're afraid we're a risky/marginal, but somehow clinging to a starting job.