SPRING PRACTICE: MIND THE GRASS. I have no idea where this photo is from, but what's not to love? Big beefy football player in the oddly delicate pose of being barefoot and picking what is undoubtedly a sand spur from his foot, a palm tree, high hills in the background, generic numbers on the helmet, everything redolent of spring practice's barefoot, casual feel... 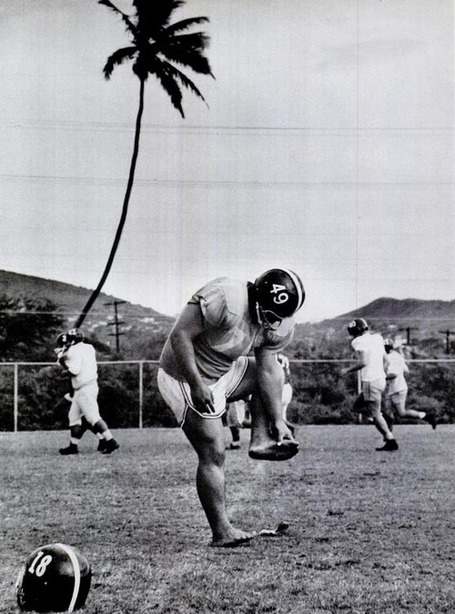 LET'S MAKE UP AND SAVE THE KISSING BECAUSE CYBORGS DON'T LIKE PHYSICAL CONTACT. Urban Meyer apologized to Jeremy Fowler, because presumably he consulted the Woody Hayes Operations Manual and found the rule "3a28: Apologize to bastards when you don't want to, because sometimes you have to work with bastards and there's nothing to be done about the goddamn situation."  When Urban does a press conference in the nude after a loss this season, you'll know we were right about the existence of the Woody Hayes operating manual, and Urban's possession of one of four existing copies.

Florida did have a practice, and the defense paved the offense into a wafer thin piece of flatbread and served them to onlookers with a delicious tapenade. Incoming freshman Matt Elam worked most of the day with the first-team defense, which would be quite a roster move, but not so much as former walk-on Mike Gillislee leaning toward the number one spot at running back. Gillislee's a fan favorite and can, unlike 95% of the people described thusly, be properly described as "running with violence." Emmanuel Moody is "limping again." SAD FACE GOES HERE.

LIFE IS JUST SO NORMAL FOR HIM THERE.  Lane Kiffin says life for him at USC is just so normal. He can go to the grocery store without signing autographs, for instance, without being harassed for autographs for hours on end. Fun note! In three years you'll be able to do that anywhere, Lane. BTW, during said grocery store visit, Kiffin wrecked a cart, promised the meat guy's son playing time he'd never be able to give him, put 28 items in his cart in the fifteen items or less lane, and then left without paying.

TASTIEST LSU BEER: JARRETT LEE I.(NCORRECT) P.(LAYER) A.(GAIN) The #lsubeer tag on Twitter is pure magic. If you haven't searched its fine flavors yet,  do so. One is the title of this tiny note, and describes what Jarrett Lee did yet again in the Tigers' spring game: threw a pick six for a touchdown. At this point it's gone past probability and into a special talent for not only coughing the ball up, but doing so where no one has a prayer of catching the intercept-or.

THIS GUY, AND THAT GUY, AND WHO CARES I'M JUST GOING TO COACH AND IF PEOPLE SHOW UP THEY SHOW UP. Georgia Tech coach Paul Johnson opens this article on the depth chart shuffles at Tech's spring practices by doing what you expect him to do: putting on his glasses, reading a list of players off a piece of paper, and doing everything he can to make the words "Giving a shit about what you pisstards think is something I do once a week in the month of Neverfuckingever."

COLORADO TO EMPHASIZE ITS STRENGTHS. Dan Hawkins says he's going to harp on turnovers in spring practice, which seems entirely unnecessary given Colorado's superb ability to make them thus far in his tenure. Focus on something you don't do well, crazy coach man! Like, you know, anything else.

WANTED: QUARTERBACK. Must be able to hand off to indestructible four foot tall running back. Location: Corvallis. Job perks: will probably win eight or nine games no matter what happens.