Orson: Bill Caswell. Five hundred dollars will buy you a ticket to Mexican rally racing glory, but you have to have the grit, cunning, ingenuity, and blind ballsiness of Bill Caswell to take that ticket and finish third overall despite having no sponsors, no support crew besides occasionally helpful spectators, and a trunk full of duct tape and scrap metal as your machine shop.

The full story is here, but know that Caswell executed so many different maneuvers cribbed from the Manual of Spicy Living that it is indeed hard to catalog them all without the full devotion of a thesis paper. (PhD candidates: take note.)

2. Working an unemployed spell to the fullest. So is someone reading this, so take inspiration and go pull off a caper. Breaking into my house does not count.

3. Overcoming adversity. Some people might be disturbed by an engine exploding. For Caswell, this was called "practice."

4. No, seriously, he ran a rally car race in Mexico in a car he bought for $500 bucks off Craigslist. There's photos 'n shit. 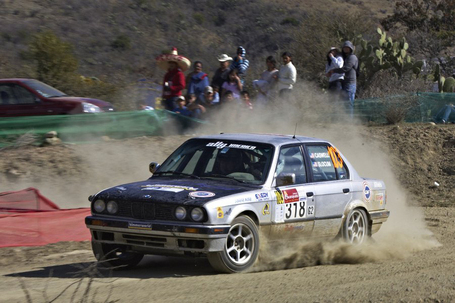 Caswell sent frenzied emails back in between "jogging through houses at 100 mph" and performing his own repairs, something that won the affection of fans who said he fixed his car "like a Mexican." (<----compliment, and a grande one.) The choicest cut of the insanity of the race, which included Finns launching themselves off cliffsides and spectators mooning the racers, is this:

"On the third stage we missed a jump call (our notes were in Portuguese or something) and hit it at like 80 mph or so and exploded into the air. The launch felt like hitting a brick wall and broke a motor mount arm clean in half.
But the jump was amazing. Later I had a minor off but regained the road. Some kids threw boulders in the road on a transit and I punctured my gas tank losing nearly a half tank in 24 km on the next stage. Best part, the officials pointed out our leak and showed a handful of gas to us when we asked how big it was — I knew we were screwed, but they said we could start the stage so we did. I patched it with just stuff in the trunk — RTV and balls of duct tape — twenty feet after the stage finish, on the side of the road, with the officials watching."

Orson: Taiwan Beer. Don't buy it. Really, don't, we insist. It is rumored to have a hint of formaldehyde in it due to its proximity to a major chemical plant. You might think this unusual if you couldn't attach any site in Taiwan to the phrase "proximity to a major chemical plant" and still be speaking factually, which you can. In short, the entire island is one long array of cancer-fonts built on the Ring of Fire and just waiting to explode/implode/fall into the riven earth and kill us all. The Toxic Avenger would be considered auspicious just like the three-headed turtle featured in a newspaper around the New Year when we lived there.

We put Taiwan Beer in here strictly for sentimental value, since a year's consumption of the large bottles (the ones Taiwanese drinkers usually split between two or three people) gave us an affinity for all shitty Asian beers: semi-flat, inconsistent from bottle to bottle, and cursed with a skunky high forward note of what was lime on Monday, skunk-ass on Tuesday, and by Wednesday in your refrigerator had devolved into the reeky belches of a Kaohsiung plastics plant. In summary, it tasted exactly as a beer should: like the place it's from, for better or worse.

Add in Khmer Beer (deplorable,) any number of regional swills in China, San Miguel from the Philippines, and our personal favorite BeerLao, the king of all jacked-up Asian beers in that you could buy gallons of it for nothing while drinking it with minimal wincing, and the choice of Taiwan Beer is a reminder to you that beer is not so much about what you're drinking, but sometimes where you're drinking it and with whom. This is especially true when you're consuming more than trace amounts of formaldehyde with each sip and watching your hair fall out from some mysterious acrid cloud of industrial fog you drove through the previous morning. Drink all of these warm and in cans for most authentic (and auspicious) results.

Holly: Homemade bitters. Being the pioneers of Spicy Living and thus inordinately fond of Manhattans, we ran into some trouble over the winter when Angostura shut down and threw professional and hobbyist mixologists alike into a bitters-barren wasteland of half-assed Old Fashioneds. (Olds-Fashioned? Like Surgeons General?) The stuff was impossible to get anywhere, and though the supply side has since been righted, interest in home-brewed bitters took a spike. 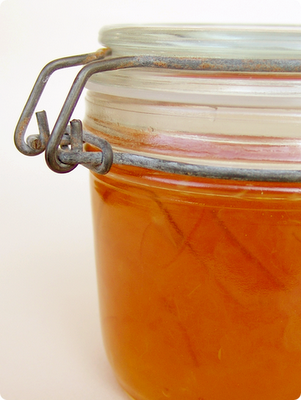 (And, in our case, interest in crafting a line of school-specific bitters for tailgating, because we faincy like that and are drawn like very drunken moths to anything constructed in a mason jar. Tennessee's is made from Everclear, tangerine rind, juniper and hibiscus blossoms.) An exhaustive list of experimental varieties is available right'chere, and seriously: we're reckless scientists in the kitchen and have yet to make a bad batch of the stuff. They also make fetching gifts, if you're into that sort of thing.

Orson: Country Ham. The zombie meat that keeps giving, country ham is like tuberculosis in so many ways. It can live on a sidewalk for twenty years; doctors generally agree on it being very bad for you; and like TB in the literature of the 19th century, it makes one sweaty, disoriented, and lusty. They sold them at our neighborhood market growing up, and the smell was both baffling and fantastic: how did it smell so tantalizing, and yet hang for decades on the same pole at the back of the store? The Loveless Cafe in Nashville is the place to enjoy it, especially since years of concentrated pork smoke has covered the place in a fine wax of smoky pig leavings. You, too, may be indestructible after a visit and as lusty as Doc Holliday, famed country ham sufferer and part-time tubercular.

Holly: The Maltby cinnamon roll, used here in the singular because they are as large as your head and we have never seen a person eat one on their lonesome. You know those square clear plastic takeout boxes you see at grocery salad bars? That'll hold one (1) roll. 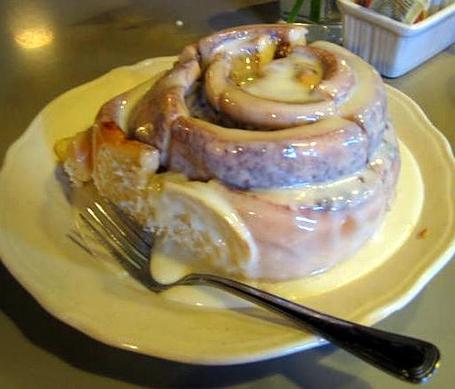 (Note for scale: This is a dinner plate.)

Unfortunately, you have to drive to quaint Nowhere, Washington to get one. It's still worth the trip and scheduling time to get one takes precedence in every jaunt we make to the Pacific Northwest. (Pac-10 comrades, figure out how to mail us one and we'll name a star after you.)

Holly: From the fine folks who brought you that Gay Bar internet song and the lesser-known but hella-spectacular I'M THE MANATEE BITCH, is it a good idea to make a rocket out of bacon?


It is not. But a song about a bacon rocket is another ball of fish entirely. 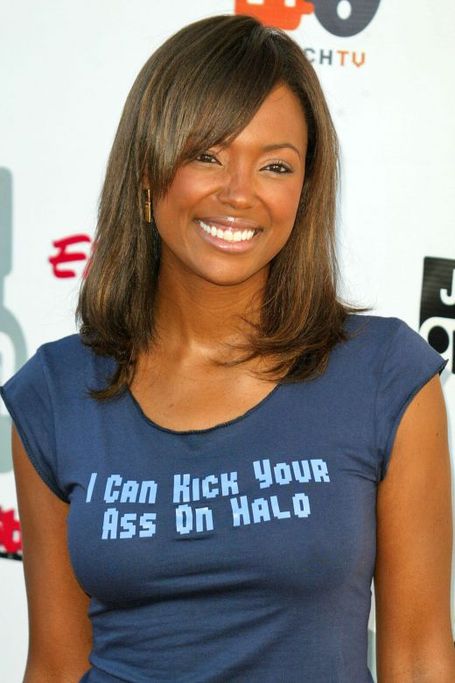 She plays video games, brews her own beer, plays (and looks like) Lana from Archer in real life. Rules be damned. For this week's purposes, she's a beautiful fireworks factory explosion in a shirt boasting of her Halo skills.

Holly: Speaking of the show we cannot stop working into as many posts as possible, the "Skytanic" episode of "Archer" may have been somewhat closer to reality than any of us realized: A company called Airship Ventures based at Moffett Field in Mountain View, California, will give you an aerial tour of the Bay Area aboard an honest-to-god zeppelin. 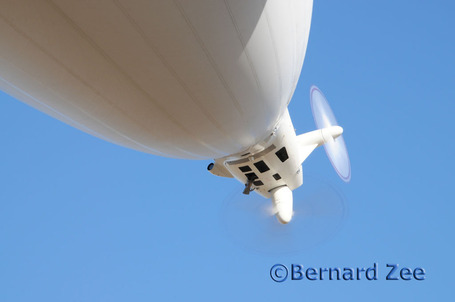 Manufactured by Zeppelin Luftschifftechnik GmbH -- German for "FOR THE LAST TIME, IT'S FILLED WITH NON-FLAMMABLE HELIUM" -- the "Zeppelin Eureka" is currently the world's largest airship and can carry 12 passengers at speeds of up to 78 breathtaking miles per hour. And it's perfectly safe -- though I'd avoid smoking, you know, just as a precaution.

Orson: "It's an IRONIC PAINT JOB. What don't you get about it?" 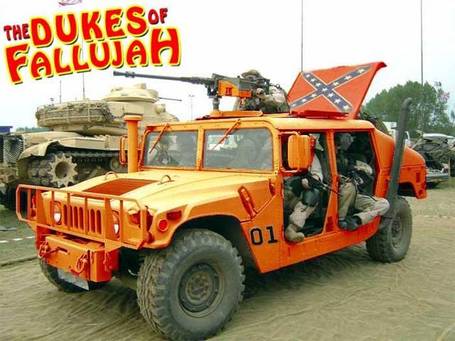 Note: Only if it comes with gun mount.

Lauren Ambrose is a sex maniac and maybe a murderer and Amy Adams is in there way before anyone "discovered" her in Junebug and there are midriff shirts. Go on, now.

"Oh, wow, isn't this song kind of weird and tragic since Katrina?" No, since songs about crushing imminent death and doom should be about actual crushing death and doom, or at least one of its fantastic derivatives. We, like many of you, were raised in the deadzones of the country populated by the same eight radio stations playing the same one hundred and fifteen songs over and over again. This is why we can recite the lyrics to "Hot Blooded" by Foreigner, because THAT WAS OUR TRAINING AND YOU DON'T UNLEARN SKLLS LIKE THAT. Matthew Bourne has krav maga, and we have the entire AC/DC catalog committed to the hard drive. Tradeoffs are part of life.

We don't even hear many "classic rock" songs now thanks to overplay. They're scenery now, trees in the roadside on a car drive. You hear something seven hundred times and you don't get tired of it: you pave it over with amnesia, and almost don't regard it as noise. That applies to half of all Led Zeppelin songs at least, but with this...there's this drumbeat, this heavy fucking pounding beat recorded without any mods or effects, just John Bonham hammering away with big dick drumsticks for 7 minutes like a horror movie killer lurching after his victim. There is a Jimmy Page guitar riff that sounds like it's being played under eight feet of swift killing water, and John Paul Jones cranking away on bass, and Robert Plant moaning "Crying won't help you/ praying won't do you no good," and for doom junkies everywhere, this is crack on a pair of stunning Brazilian buttocks, applied easily in aural form.

Slayer may sound like Satan himself arson-fucking your world to death, but "When The Levee Breaks" has the slow, deliberate crush of a natural disaster down pat. And for that, we kind of want to take it behind a middle school and get it pregnant. Slowly, and deliberately.