Name discrimination isn't a real problem in America mostly because we all practice it, making it the most widely acceptable variety of prejudice around.

So when Rich Rodriguez did business with a guy named "Clegg Lamar Greene," notice the man has multiple redneck names strung into a moniker ending with a synonym for cash. Understand that by title he must be sketchy, and his riches ill-gotten, and that if you make yourself a guarantor on a million dollar loan with him, you will end up where Rich Rodriguez is today: on the wrong end of a lawsuit re: said loan.

Rodriguez is named as a guarantor on a million dollar loan funding the construction of The Legends of Tuscaloosa, a real and functioning condominium development within walking distance of Bryant-Denny that, you know, is now making money that the people who made the loan in the first place want their piece of because that's how investment works. Clegg Lamar Redneckhisface disagreed not only with them, but with others, and that's why he's facing five counts of felony fraud, and why a lawsuit filed today in Tuscaloosa has Rich Rodriguez's name listed in it.
Redneckhisface also got Rodriguez tied up in a similar suit re: a planned Legends development in Blacksburg, Virginia. This is all to blame on two things: Rodriguez's lack of familiarity with name-based prejudice, and his lack of organizational tools. The first can begin to be addressed by the talking points above, but the second--which resulted in the NCAA violations re: practice, etc--has a clear and simple solution in the form of prescription medication.
Dr. Ludacris recommends: Cognac. 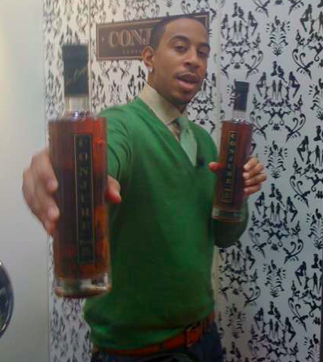 Cognac promotes relaxation in order to allow you to focus on the daily tasks you have to do in life. Side effects may include vomiting, headache, crusty teeth, increased libido, lowered inhibitions, a fondness for all things Burberry, and inappropriate nudity.  Ask your doctor if Cognac is right for you, though it totally is and we're certain of it.