Share All sharing options for: FLORIDA'S OFFENSE 2009 VS. 2010: THIS YEAR WE'LL HAVE AT LEAST FIVE PLAYS

For much of last year, Florida had three plays. First, the zone read, based on the dive play Steve Addazio was deeply and frequently mocked for in these quarters. 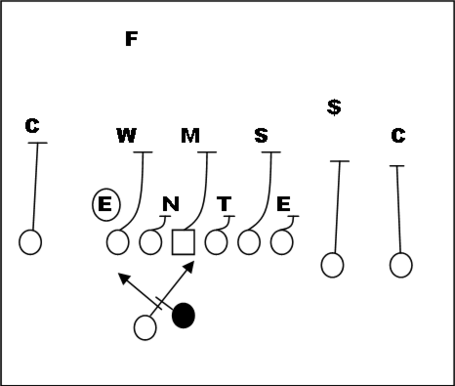 Basic spread offense juju you should be more than familiar with by now: offensive line blocks down, the defensive end is left unblocked to the opposite side, and we all just sit there and wait for the end to decide between staying put (RB give) or chasing the back (quarterback keeps.)

NOTE THERE ARE ENDLESS VARIATIONS ON THIS CONCEPT YES WE KNOW. Brian in particular has a nice examination of Michigan's use of the zone read in combination with some veer concepts just to show you a few of the possibilities. More often than not, the dive plays came from Tebow misreading the zone read, something he struggled with at times throughout his career. (See the first half of the 2008 title game against Oklahoma for evidence.)  Tebow's discomfort at times with making reads across the board only emphasizes how crucial losing Dan Mullen was to him as a quarterback, a loss when combined with the loss of Percy Harvin more than halved his production.

The other play Florida ran last year: the streak/post trips combo, or as we call it, "IT'S GOING TO RILEY OR I'M SCRAMBLING." 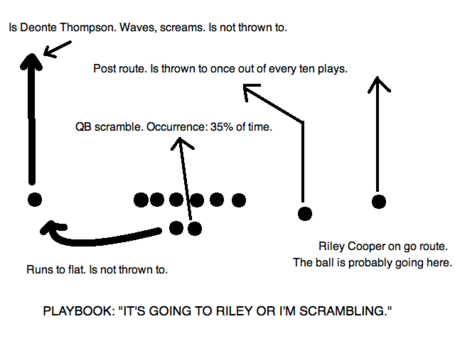 Throw in the variation on the shovel pass and maybe the Hernandez TE screen, and we're pretty much wrapped up on 2009's offensive innovations, which were minimal at best compared to some of the Mullen-era formation-fests. The best conspiracy theory we've heard for the Paint-by-numbers playbook for 2009? The offensive staff, seeking to evolve ahead of the curve and bring in an entirely new passing system based on qb coach Scott Loeffler's philosophies, trained the younger receivers and quarterbacks in the new system, kept things very simple for Tebow and the seniors, and hoped they could ride out the transition while continuing to evolve and beat the "you won't be playing in a pro-style offense" claim on the recruiting trail in the long run.

It is rumor and rumor only, but it would explain the simplicity for sure, and also why Nick Saban was able to write the next play on a whiteboard, show it to Florida's staff before the snap on the sideline in the SEC Title game, and do this for four quarters in a sick game of PIcture Pages for four quarters. It also helped that Alabama was fueled by a rage Ong Bak would describe as "excessive," but you, the scoreboard, and the flayed chunks of Gator ass out on the field already knew that.

So what might you see out of the Florida offense in 2010? Fortunately, smarter people already answered this question last year when we thought Tebow would re-emerge this year with a few more pro-style sets and reads in his arsenal to join TEBOW SMASH and his ability to hit crossing patterns. (Another thing strangely absent from the playbook this year.)

One concept that will be there for sure: Levels. Peyton Manning loves it, and unless he's playing Florida or Darren Sharper is involved, it must mean it's a good idea. Chris Brown explains it exhaustively here, and also here. It's a pro play at heart and has been for two decades, but does harmonize nicely with Meyer's base run game in its concern for the position and number of safeties on the field. It also asks the quarterback to do a bit more reading than Tebow might have done, but Brantley's not running headfirst into anyone on a regular basis or being asked to as a pass-first quarterback. Additionally, er, where's that smaller font around here...

he might be better at reading defenses than Tebow was

Check the Packers' version and you'll instantly spot some of the binds the play puts defenses in three steps after the snap.

Works against zone or man, requires a few basic reads, and can be run out of multiple formations with no loss of impact. Dead sexy on all counts, we say.