Share All sharing options for: THEFT IS GREAT TEAM-BUILDING

Guy Morriss was last seen writhing in pain on the sidelines after LSU's hail mary victory over Kentucky in 2003. Saddened to the point of frenzy, Jared Lorenzen then ate Morriss, who survived seven long months in Lorenzen's digestive tract before rafting out atop a caribou carcass and taking the Baylor job. He was fired, coached high school in Kentucky for a short time, and then reappeared as the head coach of Texas A&M Commerce, a small commuter school in the "Dallas-Fort Worth Metroplex," Texas' fortified citadel designed to survive nuclear war, zombie attack, or alien invasion. 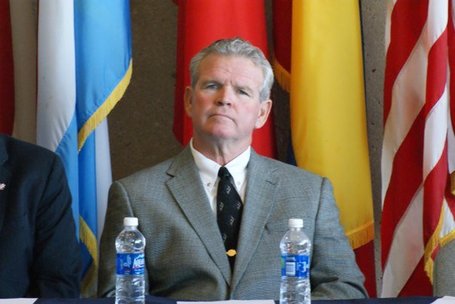 TAMU-C had two players arrested for drugs on February 19th, and under the guidance of Morriss the team took the opportunity to use the news for team-building, the 21st centuries poor substitute for organization-wide group binge drinking. Theft never made a team closer, nor a coach more eloquent.

Between 7 a.m. and 8 a.m. on Feb. 25, members of the football team stole editions of The East Texan, which were distributed throughout campus newspaper racks. On Feb. 26, Crime Information Officer Lt. Jason Bone interviewed head coach of the football team Guy Morris, who said he advocated his players’ actions.

"I’m proud of my players for doing that," he said. "This was the best team building exercise we have ever done."

Not to get all Walter Benjamin on your ass, but the still-intact digital version cannot be stolen..unless every TAMU-C player wants to get together and start stealing every computer in the Dallas/ Fort Worth area. Imagine the closeness you'll achieve then, not to mention the swag of thousands of stolen computers! For the record, the AD believes some one had to coordinate the crime, because the football players involved are far too stupid to think of this on their own.

Seriously. He says that. There's pixels and quotations and everything

"I don’t think they are smart enough to do this on their own," Cooper said.

/screws blonde girl who can clean a gun

Texas, je l'adore. The crime is likely not actually a crime, since a free daily like the TAMU-C newspaper is technically free, and therefore meant to be taken from its racks. The same could be said of any victory taken from Morriss' Baylor teams, since they were just sitting out there, and it's not like Baylor was going to use them anyway. (HT: Dave.)