PEOPLE IN GEORGIA ARE GENEROUS WITH THEIR LITTER

Share All sharing options for: PEOPLE IN GEORGIA ARE GENEROUS WITH THEIR LITTER

The University of Georgia is led by Michael Adams, a useless collection of fluff degrees in a well-tailored suit and noted dick. For years now we've been fond of calling him this, both because he represents Florida's primary conference rival and because of our general philosophical opposition to pointless dickishness on all fronts.

Adams has not disappointed on this front, alternately spending exorbitant amounts of money on personal office refurbishments, attempting to change the name of the World's Largest Cocktail Party to something un-American and misleading, and most irritatingly to Georgia fans, attempting to control where and when tailgaters arrive and camp on UGA's campus. We'd love to continue to hurl accusations of dickishness, but one fact stands in the way:

Georgians litter like pack rats in a goddamn shitheap. 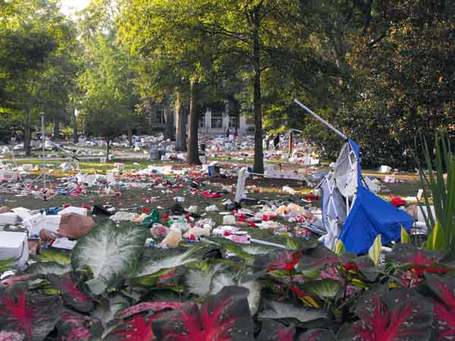 This applies to their campus, especially the North Campus, the victim of the most egregious tailgating violations (as seen above,) but it's a statewide problem. We have personally witnessed the following things thrown from moving cars that sped off into the Peach State sunset without hesitation:

It would be really, really nice to support someone getting furious about this, but cleaning up after yourself at a tailgate is basic football fan etiquette, and the people who share our fair state fail at doing that even along the roads of the place they consider home. (Their cars, however, are very clean.)  It is a violation made worse by the beautiful campus being trashed in the process. If you want to trash a campus, feel free to do it at one that deserves it, like Florida State's, for example. When they're burning your refuse to stay warm on a chilly Tallahassee night, they'll even thank you for the privilege.