Yeah! ERIN GO BRALESS! Because I bet your tits would look fantastic just hanging there in, Erin.

/is knocked unconscious by Erin's husband

ADDITIONAL HEADLINES: UNARMED BEAR HUNTERS HOPE TO AVOID BEING EATEN. The story of South Carolina's struggles under Steve Spurrier in have been twofold: getting linemen to come to South Carolina, and then getting them into pass protection schemes not resulting in the quarterback being scooped up from the grass with a slotted spoon. Thus, no surprise in this headline: "USC Quarterbacks Aim To Avoid Sacks," even though the situation has been complicated by Stephen Garcia's tendency to scramble aimlessly into said sacks. We're also looking to avoid getting blackout drunk for a holiday we have no real connection to tonight, but as with Cinco De Mayo, it ain't happening.

I LOVE BOONDOCK SAINTS LESS DO ANOTHER FOOKIN' SHOT!

(Oh, and Aramis Hillary is still at practice after his brief appearance with brother Coco in the Fulmer Cup. Predictably, he smelled sort of fratty.)

TWO MEN ENTER AND ONE MAN LEAVES. The primary focus will be on John Brantley and the shape of the new offense, but watching Jelani Jenkins and Jon Bostic death-fight for a starting linebackers position will be fun for everyone except those wishing to run/catch anything in their immediate vicinity. The shifting but ever-constant in character Crowderbacker spot has been pig-killing bar-brawl tough for years now, so this is a matter of tradition. The winner gets to flip cars in Miami with Channing himself, but only after they subdue a hundred hogs in an overrun suburban golf course in Palm Beach County as a warm-up. (Channing Crowder: our only hope against the scourge of feral hybrid hogs taking over our nation.)

IN CASE OF BIG 10 RAPTURE, WE GET DAVE WANNSTEDT'S ASS-MAGNET OF A DODGE CHARGER. Pitt is already getting "Left Behind" comparisons in discussions about the soon-to-be raptured Big East, which means Kirk Cameron is somehow involved, and therefore none of this can happen since BANG! Crocoduck! 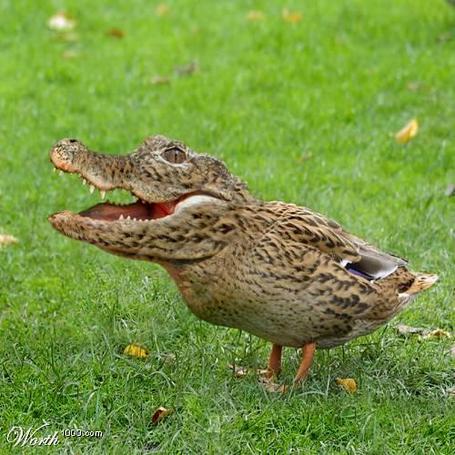 Crocoduck may be as good a metaphor as any for what the Big East could become in the event of some pillaging by the Big Ten, since it would have to sew together parts from several other conferences simply to field a viable conference slate. It's already down to a paltry and retro-ish eight teams, and could end up looking like the WAC East geographically, with member teams all over the map in some budget-straining locations travelwise. "Trouble" is the word their old commissioner used. He might know what he's talking about here.

WELCOME TO INTERNET. We would suggest this is overreaction, but watching one of the Ann Arbor press corps sizzle on the hot plate is far too entertaining to interrupt. WATCH HIM DANCE THERE IN THE FIRE! Pass the figs and brandy, Cyril, for this is to be a splendid bonfire indeeeeed.

DEFENSIVE POSITIONS OPEN: UM, ALL OF THEM. Florida State's new, "less rigid" defense under Mark Stoops will feature a less rigid depth chart, as in "completely open at all positions in the secondary, and with good reason."

GEAUX HOME. Russell Shepherd's political career at LSU is over before it started, which in Louisiana definitely decreases his chances of future incarceration.

POINTS TO BE AWARDED, BUT WE ARE IMPRESSED AT YOUR ABILITY TO BREAK MANDIBLES. Boise State does not play, and will break your jaw on or off the field. Points to be awarded later today.

WOOOOO!!! TRADITIONAL IRISH JAGER SHOTS AND KEBAB FOR EVERYONE!!!!