FULMER CUPDATE: THE BIG BOARD GETS AN OVERDUE UPDATE

Share All sharing options for: FULMER CUPDATE: THE BIG BOARD GETS AN OVERDUE UPDATE

The Fulmer Cup has gone far, far too long without an update. The Big Board is brought to you shiny and updated courtesy of Brian, whom you may recall as the man whose genitals are huge enough to recall the enormous donkey-rope of Reggie Nelson himself. Tabulations and justifications follow. 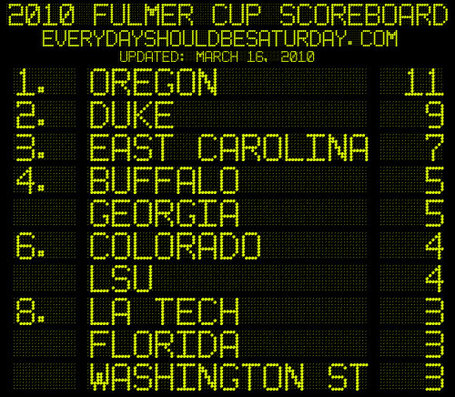 OREGON: Okay, the Ducks' total needs some fine tuning due to the legal maelstrom surrounding them. Retallied for your convenience after the flurry of plea deals this past week, and with the requisite bonus points awarded.

Rob Beard: one point for harassment and one point for street fighting head-kicking ensuing. Beard's bonus point is also justified by the pushing of a girl to the ground, which is why he got both the charges and the free visit to the hospital after the complimentary head-booting. Incident total: two points.

LaMichael James: misdemeanor harassment plus one point for hitting girls= two points. Again, we can only work with the charges here, and James' incident works out to the same total as Beard's due to the misdemeanor incident total: two points.

Jeremiah Masoli: misdemeanors are typically a single point, but second degree burglary and a season-long suspension have to merit some kind of bonus points if only because Masoli, your starter, just frizzle-fried his whole season thanks to the theft of a laptop. Two points total.

Now, the team bonus. Every single Duck player involved offered no opposition whatsoever, and in fact pled down to get misdemeanors while admitting, "Yeah, I pushed a girl/choked a girl/ stole a laptop." Plea deals have long been a sticking point in scoring, since the initial scoring has always looked felony huge while the final result for admitted crimes has been puny in comparison.

Therefore, Red Queen Orson proposes the awarding of a single point for each plea deal, since you're still admitting you did said shitty thing and are working with the overtaxed judicial system in order to speed things along and keep the bullet point "convicted felon" off your CV.

In Oregon's case, this would add a point for each plea, and thus take the eight points already allocated and add in three, thus taking the Ducks' total to eleven points in the Fulmer Cup. Thus we attempt to walk the line between sticking to the rules and reflecting the substantial achievements of the Oregon football team this season.

(The Duke charges still stand, and will until they're resolved. Nine's really just an estimate at this point since the info's vague.)

BUFFALO: In terms of a single, well-diversified score, no one can approach Buffalo junior linebacker Sherrod Lott's February 14th arrest total. Due to the circumstances of the situation--"a domestic situation"--the exact details haven't been released, but the charges read like an episode of "Family Night With Gary Busey."

After a quick check of the handy NY online legal code index, they all check out as misdemeanors, and thus five points to Buffalo. 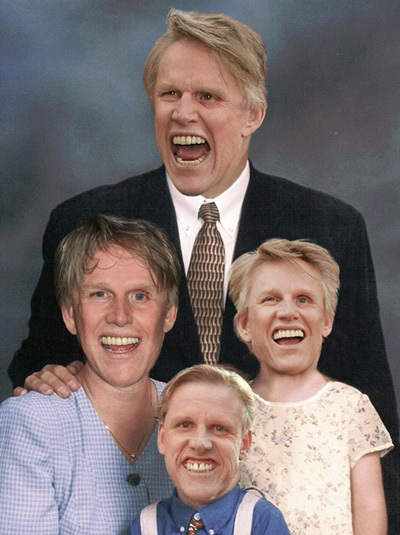 WASHINGTON STATE: Everyone who graduates with a degree from Washington State must also get an additional certificate at graduation in barfighting, since a quick read of Wazzu's Fulmer Cup history is nothing more than a litany of Wild West-style fisticuffsmanship spilling out into the street. Those exact words are used in the description of Jamal Atofau's striking of a woman, which though a misdemeanor does pick up the "hitting girls" bonus. Two points for Washington State, the team whose players seem to have found someone they can push around physically.

TULSA: Anthony Foster, defensive back, was hammered at a dorm and subsequently booted off the team last week, thus earning Tulsa one point. Coincidentally, there is also mention of an assault at a dorm involving an underage student assaulting two other students, so perhaps the relatively harsh (even by Urban Meyer's standards) punishment has something HINT HINT to do with this.

Martinez, expected to compete for the starting job at left tackle, was arrested at 2:35 a.m. Sunday, a police spokesman reported...Martinez had his 21st birthday last week.

NEVADA: One point for a piddly traffic citation gone bad via parental miscommunication. Thanks, dad.

UTAH STATE: Weed and weed-related stuff gets you two points, but in a fair world they'd let you do whatever drugs you wanted to in Utah, because it's Utah and we'd be licking toads to stay sane if we lived there.

WASHINGTON: No charges filed yet, but as soon as they match the boot print on that poor kid's face to Andru Pulu's, we'll be able to get to the...sole of this case. YEAAAAAAHHHHHHHHHHH!!!!