THE T-FORMATION EXPLAINED WITH CROCKERY. THIS OREGON QB WOULD NOT HAVE STOLEN THEM. Happy birthday to Norm Van Brocklin, Oregon Ducks quarterback from 1948-49 and NFL Hall of Famer who played for the Rams alongside Elroy "Crazy Legs" Hirsch. Simply being that close to a such a superlative nickname is illustrious enough, but Van Brocklin did have the impressive feat of being the quarterback on the first PCC team to play in a bowl game besides the Rose Bowl when the Ducks played in the 1949 Cotton Bowl against SMU. (They lost 20-13, and somehow Craig James is to blame.)

Here is Van Brocklin working through the T-Formation offense with Oregon coach Jim Aiken. Unlike SOME OU quarterbacks, Aiken didn't need to count the plates after Van Brocklin left. 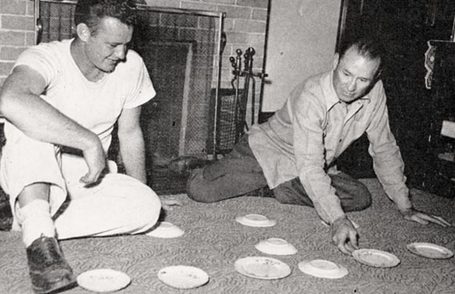 If you're thinking "Hey, that looks like Rich Brooks," then why, you're right my god what if they're AAARRRGGGHH <---is garroted by the 8183 year old immortal you call "Rich Brooks."

THAT OTHER, SLIGHTLY THIEVE-ISH OREGON QB. Twitter wags suggested Masoli would be back in time from his year-long suspension from Oregon football in time for the Stanford game, but remember that LeGarrette Blount, insane as his Ron Artest with a better hang clean act was, did not lie to Chip Kelly. Andy Staples' piece on Kelly's decision to discipline Masoli is rife with intentional sustained mock outrage, and does contain one rock-solid piece of decapitating prose hurled Nutt-ward:

In 2008, he tossed safety Jamar Hornsby after police accused Hornsby of spending almost $3,000 on a credit card that had belonged to teammate Joe Haden's recently deceased girlfriend. Fortunately for Hornsby, Ole Miss coach Houston Nutt doesn't have the same qualms about stealing from the dead

GIGGI-OW. As long as he could sign, it's all good, and you know what he likes about En-rickey HE'S FAST! (This is followed by a smezmerizing stare.)

ABOUT THAT TEAM THAT HANDILY DONATED A FELONIOUS BRO BECAUSE WE HAD EXTRAS. Team-fluffy and spring practice boilerplate in the Miami Herald does remind you of one obvious but still notable observation on the state of Florida's football union: its status at quarterback is as strong as it's been in recent memory, with B.J. Daniels at USF, John Brantley at Florida, Jacory Harris at Miami, and Christian Ponder at Florida State. Ponder in particular sits poised to have a spectacular year barring any further injury; before his injury last year he was the only thing standing between FSU and complete oblivion, and was the most valuable player in college football for his team. Yeah, we said that. It doesn't mean we don't want to see a hailstorm of safes rain on him for wearing garnet and gold, but his singular value in 2009 for the 'Noles transcends our hate. It would be superb to see him have a splendid eleven game season, and then immediately throw 8 interceptions in the Florida game.

BAMA SHUFFLING AS PART OF THE PROCESS. Alabama's losing Terry Grant, who appeared at one time to be the prize pony of Alabama's stable of running backs, to what will likely be a medical exemption. Nick Saban is also switching some underclassmen over from offense to defense, and that can't possibly be a bad thing because the preseason number one isn't just the national champion advanced forward in a blind and unthinking act of mass poll idiocy, no?* Hey, look! Godzilla wrestling Mark Ingram! Pay no attention over here!

HE HAS THE MOST DIFFICULT TO DEFEND STRATEGY OF ALL. BYU lost Max Hall to graduation, meaning three new qbs are politely duking it out without profanity or caffeineated anger in BYU's spring practices. The EDSBS money is on James Lark winning, since he recently finished a three year mission in St. Petersburg, Russia, and therefore has something the other two qbs likely don't have: performance-enhancing antibiotic-resistant tuberculosis. Makes 'em lusty!

IF I DON'T SEE MAXIMUM EFFORT FROM YOU I'LL BEAT YOU LIKE I USED TO BEAT CRACK DEALERS BACK WHEN I WAS A COP ON THE STREETS OF RICHMOND.  Mike London's speeches as Virginia kicks off spring practice must be a thousand times better than Al Groh's muttering, if only because they all end with "...and I was a cop in a bad part of Richmond, Virginia, so this ain't shit, y'all."

WE'RE ALL RUNNING OUT OF TIME IF YOU WANT TO GET MORBID ABOUT IT. This is pretty vanilla spring practice stuff, and contains Rich Rodriguez's moniker for this year, Rich Rodriguez "Who Is Running Out Of Time" "And is On A Hot Seat" "In a Must-Win" year. Why share it, though? Because we're trying to inoculate you for the eight to nine months of this coming at you, reader. Read it until your eyes grow a callous and cease to see the words at all.

THAT FAKE THING WE CREATED TO REPLACE THE REAL THING IS BAD FOR YOU, PART 83828932. When are you and stock angry grand-uncle on the same page? When it's talking about how much FIeld Turf sucks, him because "EHHHH horses can't eat it," and you because "EHHHHH it makes knees explode at an alarming rate." Surprisingly, the Field Turf CEO disagrees with your numbers and fact-y things, because it costs him money.

THE EXTREMELY MOVING PHYSICAL EXPERIENCE OF HUMAN SKILL IN MOTION. No words but the minimum: health and the expression of it are the foundation of the human experience. Accept this, and you will agree that this footage is the insane house made of beer cans and particle board built on that foundation.

*Precisely what it is.