Steady study of the Digital Viking's recommendations will increase spiritual happiness and liver circumference. Apply the principles weekly and live them daily for best results. 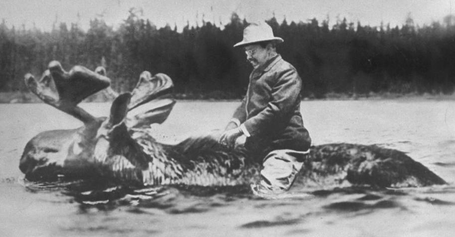 Oh, that's just TR on the way to work, motherfuckers. See? A man who believed in green technologies what still made one look like a man, he rode to work daily from his rustic hunting cabin in the woods of Canada (where he was also President even though they didn't and dont have one) to work in Washington, DC, his great Moose Santiago's hooves thundering along at three thousand miles an hour along a special turnpike he built himself in single weekend of intense effort. And the commute was completed with nary a dead orphan squashed along the way!

Teddy Roosevelt was rich, which almost always means you grow up to be a simpering lacy napkin of a man, and had his chances of complete foppery doubled by childhood illness. Roosevelt placed both in a headlock, bore down, and asphyxiated any and all signs of weakness out of himself by boxing, earning a black-belt in jiu-jitsu, moving West just for the hell of it to be a cowboy,  hunting large animals with his bare hands and then posing next to the carcasses with a gun to spare the feelings of lesser men who used firearms to kill, organizing African and Amazonian expeditions back when that was a good way to end up exotically dead, earning his degree from Harvard fair and square unlike a lot of other fatbacked pantywaist plutocrat-fruit, oh, and let's just pick up a Nobel Peace Prize for irony's sake after leading the charge up San Juan Hill at the age of 40 in the Spanish-American War.
This doesn't even take into account other sundry accomplishments taken off the top of the head about his bottomless well of masculinity. TR was the cop who walked the streets as chief to fire corrupt officers on the spot. He was also the guy who finished a two hour speech in Milwaukee after being shot during his third campaign for President, because a bullet in the chest is but a gust of wind for a mighty cock-oak like TR. That is not a sculpture on Mt. Rushmore, but rather the embalmed head of Roosevelt himself, who finally passed in his sleep after a long day of strangling disobedient mules.

Death had to take him sleeping, for if Roosevelt had been awake there would have been a fight

We would have had ten Bull Moose dollars on Teddy. Live vigorously! Expand your chest! Build white battleships and parade them around festively! Take a page from TR's manual of living and make no excuses, since if he can finish a speech while bleeding from a gunshot wound, you can probably get to the gym twice this week.
DRINK.

Holly:  First things first: Prosecco is not champagne. It is a "sparkling wine," and among its many subtle differences with champagne, its alcohol content isn't quite as high.

Yet in a diabolical way, that discrepancy is the prosecco drinker's undoing -- you have two glasses, you think, "Wow, I'm not buzzing nearly as hard as I would be if I was drinking champagne," so you have two more. They're like wine coolers for grown folks, and somehow that's not
a slam. 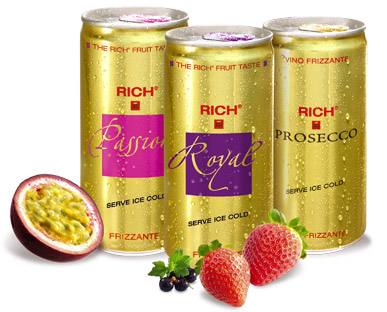 Lather, rinse, repeat, until you're waking up on the floor wondering which ex-bosses you might have called to taunt them about how totally fine you're doing without them. Yet Europeans of various nationalities have been known to guzzle this stuff out of cans; in Italy, grade-school kids can probably buy them out of cafeteria vending machines. For looking Prosecco's sneaky murderousness in the eye and muttering "Bring it on," they have our respect.

Orson: The Monkey Gland. Oh, you think you're so special, Jager drinkers. "It's some kind of crazy horny German hunting concoction with like blood and bile and crushed stag nuts in it! It's medicine, man! Those Kraut hunters are out there mating with trees to alleviate the urge, brah!" The insinuation of odd herbal medicine as a drink ingredient is nothing new, as evidenced by this spectacular find by the good people at The Art of Drink: The Monkey Gland.
Before you associated the phrase "monkey gland" with "prion disease," "AIDS in a glass," and "something a Chinese guy was caught trying to smuggle into LAX in a thermos,"  the Monkey Gland was designed to evoke a kind of medicinal danger,  the kind of drink trafficking in its name and the sinister reputations of its ingredients: gin with a touch of absinthe. The recipe:

Serve in monkey skulls. WE KID. Human skulls will be good enough. The results, if you can find a bartender whose bar has some street-legal absinthe and who actually knows the recipe, are quite tasty indeed, especially with the fruit undercutting the high herbal twang of the gin and anise-y absinthe. (The Art of Drink doesn't think much of it, but their taste buds are probably stripped clean from years of drinking by now. We have at least three left.)
Drink three and immediately begin demanding to see the corpse of Henri Toulouse-Latrec, because that's something a Parisian bartender of the 1920s would respect.
COMESTIBLE. 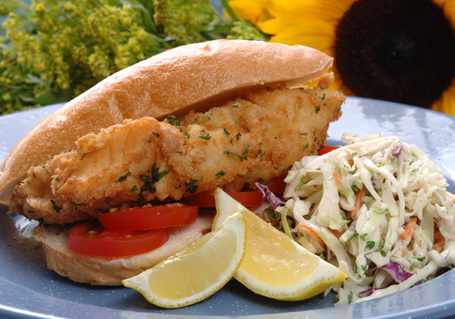 A Floridian classic as essential to the state's identity as random murder and malaria. Floridian cuisine is, for the most part, a whopping clanking disappointment you choke down after a day on the beach: overdone fish in one of three varieties: fried, blackened, or baked in the very taste of sadness itself, the watery butter/lemon sauce someone a thousand years ago used to cover the taste of bad fish. This is usually served with hush puppies in tourist restaurants with wood floors and fake seafood in nets on the wall. When hurricanes wipe them from the shores, no one misses them.

The Grouper Sandwich shines as a luminescent buoy of happy batter-fried excellence in the midst of this sea of Buffett-ized mediocrity, and we have no idea how it happened. Most likely, it was luck: grouper happens to fry up brilliantly, solid enough to stand up to a good roll in the deep fryer while lacking the serious oils that turn other fish into glistening artery bombs.

For some reason it's also nigh-impossible to get a bad one in the Tampa Bay area no matter how hard you try. Usually served with some tartar sauce, you should get it fried no matter how dire those shooting pains in your left arm are, and it should be consumed with a cheap, cold beer, because that's how the 813 and 727 roll. (OH WE SEE YOU ST. PETE. And you're playing shuffleboard in order to steal grandma's meds when she's not looking.)

Holly: Fries Quatro Queso Dos Fritos, or Twice-Fried Four-Cheese Potatoes. Inspired by the TV show Psych, which we have never seen but which contains Dule Hill and therefore must be a fine upstanding television program, the instructions are as follows:

Inject potatoes with a 4 cheese mixture, fry them ¾ a way, pull them out, batter them, fry them again and then serve them with bacon and ancho chili sour cream. 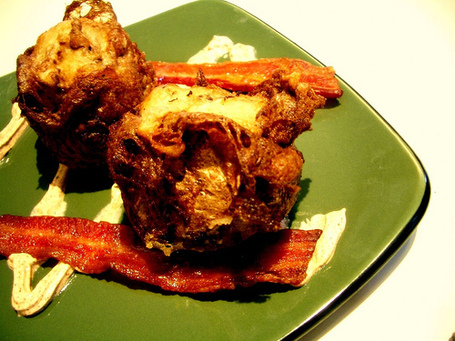 The threat is real. The recipe is here. The intestinal carnage, unimaginable.

Holly:  In honor of the recently crowned Best Picture of 2009, here's the opening four and a half minutes of "The Hurt Locker." The big boom-boom doesn't happen right away, but your patience will be rewarded:

Establish a scenario, build tension to an almost unbearable, rip-the-armrest-off-your-movie-seat degree, then blow something up: That's how you make a movie, kids. Kathryn Bigelow, you my shawty.
Orson: Chuck Norris. He turned 832 this week, but can still fight a bear to a draw.
TRANSIT.
Orson: The EVA Fuelless Car. It was never produced, but in theory would have been a gigantic coffee-flavored Jelly Belly howling down the roads of our nation on the furious power of a plasma engine.  We'll take five of them in, um, brown. 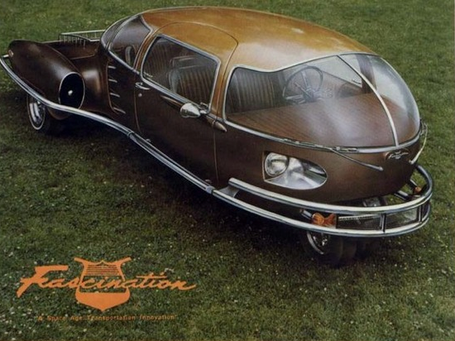 Bonus points are awarded for the car resembling something Mr. Bean would drive in a skit, which instantly places it in our queue of lusted-after automobiles. (HT: Boing Boing.)

Holly:  Matthias Rust maybe ought to be up there under "Patron Saint", for excellence in Digital Viking-style transit and sheer mansome moxie. As a teenager, he stole a plane he was using for flying lessons, flew it to Moscow, and cruised right on into Red Square. In 1987: 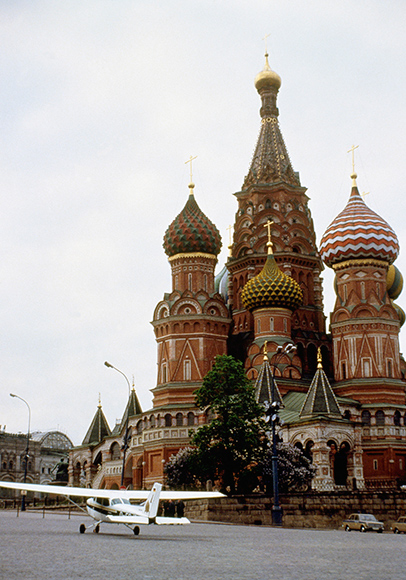 From the essential Iconic Photos blog:

For violation of the Soviet airspace and oddly enough, hooliganism, Rust was put on trial. He served 432 days of his four-year sentence. The boy whom the media called "the new Red Baron" or "Don Quixote of the skies" never flew again. Inside the Kremlin walls, Mikhail Gorbechev would use the incident to shake up the Soviet military industrial complex and sack his top-brass.

Among Gorbachev's chief failings was his inability to recognize and appreciate a chill bro when he saw one.

Holly: Mille Bornes. The premise is simple. First player to lay down a thousand kilometers' worth of mileage wins. On the way your opponents can stymie you with flat tires, accidents, speed limits, and empty fuel tanks.

This French card game was a staple of summers at the beach and a staple of ensuing fistfights that threatened to send us all home early, and to this day causes such a high degree of bad behavior in grown-ass adults playing it you'd think it was a drinking game. I've never known anyone with the stomach to actually attempt it as such, but it's a long offseason.

Orson: Year Zero, Francois Ponchaud. Tired of all that refreshing sleep you've been getting? Read French journalist Ponchaud's account of being in Phnom Penh as black-clad teen zombies trudged out of the Cambodian forest, took over the capital, and then began demanding death and more death in shovelfuls. Phantasmagoria of the realest and most harrowing kind oozes from the book: the eerie quiet of the city after the takeover, the dead look in the eyes of the 14 year olds who formed the backbone of the Khmer military, the pile of burning televisions the Khmer Rouge made as part of their attempt to eradicate all corrupting foreign influence. It's not pleasant, but it does make the skin crawl in an arresting manner you likely won't be able to put down. SPOILER: they kill everyone.