Share All sharing options for: A FINEBAUM CALLER CALMLY ADDRESSES THE ISSUE OF ALABAMA SHIFTING ITS SCHEDULE

The Paul Finebaum show, March 11th 2010. John from Opelika takes the line to speak on the topic of Alabama getting the SEC schedule moved around to break up six of their seven conference games granting opponents a bye week before playing the Crimson Tide. 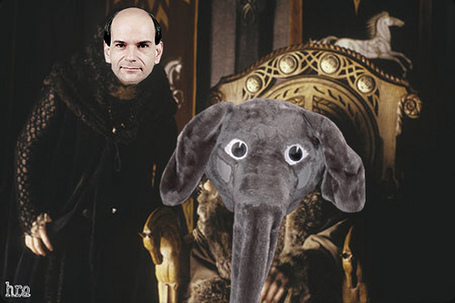 Finebaum: And we have...John, on the line now. Go ahead John.

John from Opelika: Now Pawool, I know Nick Saban's done a lot for these boys and for this team and for this town. I'm not here to disrespect what the man's accomplished. Even though he's short.

John From Opelika: And I don't mean to sound ungrateful about being an Auburn fan.  That ain't what I'm here to do. I know other people are, but that's not what we do. We're not whiners at Auburn. We're better than that. Even if we went undefeated and didn't get a national title in the greatest robbery this side of Sandra Bullock getting the Oscar for The Blind Side. Because we all know Houston Nutt deserved it.

Finebaum: If you'd just get to the point here, John.

John from Opelika: But dammit Paul, and excuse my language, but do they want us to just put down lily pads made of silk and hundred dollar bills under Nick Saban's feet? I mean, I could do my kid's homework for him. BUT I DON'T PAUL. THAT AIN'T HOW IT'S DONE IN THE ESS-EE-SEE.

Finebaum: I presume you're concerned about that big game against Arkansas State to open the 2010 season.

John from Opelika: Paul, it ain't about Arkansas State. They're a fine program. They play in the Sun Belt, where they don't move heaven and earth for one team. They're not doing that for TROY, PAUL. THEY'RE NOT DOING THAT FOR MTSU. AND THE BLUE RAIDERS WOULDN'T HAVE IT BECAUSE THEY'RE NOT SCARED. THAT'S WHERE WE'RE AT PAUL. MTSU has more courage than the Crimson Tide.

Finebaum: Um, they're not in conference, John. That's why MTSU plays them every year. They're in the Sun Belt.

John from Opelika: Don't do that thing you do, Paul. THAT'S DETAILS. They're scared, and now Mike Slive's giving 'em a nightlight the size of a floodlight for Nicky Saban's bedroom by changin' the schedule for 'em. And that's ain't a surprise they don't want to play UL-Monroe again. Remember what happened last time. Don't ya remember that Paul? DO YOU?

John from Opelika: I figured you'd say that. You're in their pocket like a can of skoal and a welfare check. And who didn't they play?

Finebaum: Alabama's not in the Sun Belt, John.

John from Opelika: EVER WONDER WHY NOT?

Finebaum: No, John. I havent.

John from Opelika: I'll answer my previous question for you. That team they didn't play last year was UL-MONROE. I think I proved my point Paul. I'm gonna hang up and listen now.

Finebaum: Thank you for your measured and sensible opinions, John.